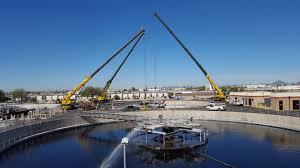 You might be surprised to learn that Arizona is in the forefront of water recycling.  We have several projects in the state that are absolutely state of the art for filtering and treating wastewater.  All of the water is currently used for industrial and agricultural purposes.  However, this past week the Arizona Department of Environmental Quality staged a rather bold test to see how their recycled water would fare in other venues.

Seeing the assistance of 23 local breweries, Arizona stage a Waste Water Brewing Challenge...to see if recycled waste water would hold up in beer brewing.  A "taste test' was conducted with four local breweries making their beer with that recycled water.  They then called in a panel of brew tasters and were stunned to learn that most of the panel could not tell the difference between fresh water, and the recycled water. Even more amazing, the majority of the tasting panel said the beer made from recycled water was superior in taste!

I just don't know.  While I'm sure that the heavy beer drinkers, after putting away a couple of six-packs, won't mind that their own urine contributed to the fresh batch they just contributed to in the nearest urinal...but I would have a problem with it.  I'm just too damned old and set in my ways to get past drinking some dude's recycled urine.....and far worse, when you think about it.  With every sip I'd be thinking about a million bowel movements moving through the recycle process and ending up in my bottle of Miller Lite.

Younger generations might be more daring, so who knows?  Maybe they'll come up with a heavy brown lager and call it Eau De Toilette Lite..and gather a following.

Things were a bit simpler when, upon sipping an Olympia, I imagined pristine waters falling gloriously over that water fall up in Washington....or the fresh snowmelt of Coors...(it's all in the water...or maybe not.)

Sounds like it could turn into a shitty ordeal.

Unless you are at the head waters of a river and your community gets its water from a river, you are drinking recyywater. I know that much of Arizona’s water originated in the Rocky Mountains. Once the toilet is flushed, the waste water goes to a treatment plant, is treated and often put back in the river to the next community and so on.

Ralph, you're too graphic for me, and Cindy, you're telling me more than I wanted to know. I am now going to have to research where our drinking water is coming from. I know that much of it comes from the snowmelt up north and we have several rivers feeding our water supply so...........fingers crossed.