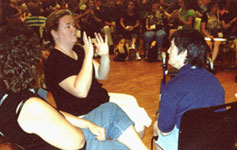 If you've watched political conventions, or major national ceremonies, you've surely seen those folks who stand to the side and sign for the deaf.   I'm glad that they do that.  Every citizen should have access to what our nation is up to.  Just this morning, with nothing better to do, I quickly flipped through several of the cable news channels.  And of course we all know all news channels are biased.  We even know where their biases lay.

That quick view of those news broadcasts got me to thinking.  Let's assume that, at some point, America just tunes out all the news sources, totally convinced that whatever they are being told is at least partially bogus and, at worst, filtered and censored according to the source's biases.  Those broadcasts become even more problematic when the so called "analysts" are brought in.  When that happens you immediately go on alert, whether the analysis is skewed toward Republicans or Democrats.  And things have gotten so far out of hand it has now become impossible for civilized debate to take place.

So, again assuming the news channels ever wanted to achieve a level of credibility with the viewing public, what if those newsrooms positioned the political opposition over to the sidelines as analysts posit about the other party, much like those hearing impaired "signers" that you see over on the sidelines.

For example, when Rachel Maddow and one of her liberal guests begin branding Republicans as "oligarchs", unfeeling ogres who persecute the "47 percent", what if if we put Newt Gingrich in a little circle over to the side, and allowed him to emote as his conservative philosophies are assailed.  Let the viewer show ole Newt grimacing and grinning, or poking a middle finger in the air in opposition.
And, conversely, put Pochahantas (you know who I mean) in that little side circle as Sean Hannity is spewing his conservative gruel.

While this proposal might be a bit weird at first, those sideline signers might at least give the viewer pause to question the lies and savaging of their political opposition.....and let's face it, many of them are lying out their ass.  I at least give Fox News credit for trotting out liberals frequently to offer their two cents.... you rarely see that same sense of fair play with the left-leaning networks.

We might even give those signers an iPad, then allow them to type side-line captions, calling out their opponents in real time.

Failing this sideline signing, I don't see how these so called "journalists" ever hope to be believed ever again.  Just something to think about folks.  I came up with this idea at 3:30 in the morning so, if it sounds a bit bizarre, well, maybe it is.

I don't watch any news that appeals to my emotions, Liberal or Conservative. Both are biased as Hell and have an agenda. Actually, I don't watch much television at all and cut my cable cord a couple years ago. Yes, they all lie and just want to get my dander up (where does That expression come from?)

True stuff! And when I read the local "newspaper", I only believe what is on the comics page.

I see that there's enough skepticism this morning, to give us a bit of hope. We'll still need those "signers" for folks less diligent.

What is absolutely stunning to me is to listen to the MSM "journalists" reject all claims they were open advocates for the Obama cabal. They loath Trump with a fury unseen since Nixon, but the next time a liberal infests the WH, you'll see the love and tenderness in dealing with that President. You are absolutely correct when you say they will never be seen as credible again, yet they do not care. They will continue to pander to the leftist base. BTW, I watch NONE of the news networks, no Rush, Hannity, any of that. They're just as bad as the lefties.

I do not watch either, Randy. As to that the MSM's good old biases, just this morning I hear their mourning of the tax cuts, lamenting that it would add a trillion to the national debt over ten years. Whether that is true or not, I find it amusing that Obama ran up $8 trillion or so during his regime and neither his media worshipers, nor the Democrats batted an eye lash.