The "Me Too" Movement; Courage? Or Lynch Mob? 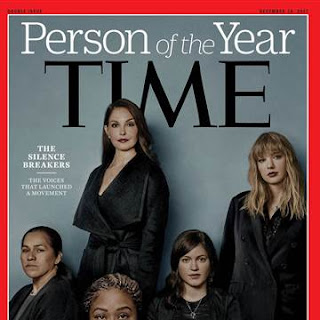 Well, we all know by now that Time Magazine, that tabloid that now serves as the last liberal bastion of the weekly magazine (a fact that sends old Henry Luce spinning in his grave) has named the Me Too Ladies as "Person of the Year".

Having perused some two hundred stories about the specifics of all that sexual harassment, I'm still left wondering if these ladies are real social warriors....or just the 21st Century edition of "lynch mob".  While I certainly abhor the boorish behavior of many of the men accused, I can't help wondering "why now?"....why, after 75 years or more of this sexual behavior, so many women are coming forward with their complaints that range from outright rape to as subtle as being made to feel "uncomfortable".  And wasn't it Ashley Judd herself, who admitted telling Harvey Weinstein that she'd go to bed with him when he got her a role that won her an Oscar nomination?  What does that say about Ashely Judd?

Or how about the gal who is now claiming that, 35 years ago, Dustin Hoffman grabbed her ass?  Was it not offensive then?  Or was it okay then because it furthered her career ambitions?   And if a bout of "grab ass" proved so offensive to her, why is there a photograph of she and Dustin as she's grabbing his crotch?  She says now it was revenge, yet back then she was yucking it up and thought it was funny!

Look, based on the stories we've read, clearly there were men out there who are patterned and habitual sex offenders.  There's no denying that.  Yet, were I to choose the front line warriors for the war against women, it would not be the women appearing on the front of Time Magazine.

Can anyone remember, just last spring, when liberals in both Hollywood and Washington were snickering at prudish Vice President Mike Pence?  The Vice President has made it a life practice not to ever be alone with a woman, not his wife, without his wife being present, nor will he attend a cocktail party without his wife.  Pence calls having his wife as ally provides a "comfort zone".    Well, like I said, liberals were snickering like crazy about this.  Alas, now, eight months later, ole Mike was not so dumb after all!

I've written unendingly about the harmful imbalance currently present in our society.  Even as women flocked to 50 Shades of Gray, a hot little book about sadism, even as they swoop up those romance books about bare chested, bodice-ripping pirates, they seek mousy, metrosexual men when it comes to relationships.  They want the men to mow the yard, change the oil in their car, but also change diapers, do the laundry, cook gourmet meals...then shave their pubes and their chests and be submissive in the bedroom.

It's all crazy....from social behavior...work practices...all the way to the courtroom.  Women want to manipulate relationships that win them favor in the work place, and in the bedroom, and, in the court room, want mere accusation to be sufficient to destroy a man's reputation.

This year's holiday office parties ought to be a riot.  The men will stay on one side of the room, the women on the other.  The men will talk about........what?  Best ways to fold a diaper?  How to fold a fitted sheet?  Recipes for roast chicken?  And the women will be discussing all their "me too" experiences.  If you think this is facetious, just look at the holiday party rules companies are putting out the last few weeks; a two cocktail minimum and more mannerly holiday decorum.  And you can't blame them, really.  Sexual lawsuits are in high fashion.  Simply not worth having to deal with the "Me Toos".

The best advice I could offer men today is "do like Mike"...bring your wife along whenever you're to meet alone with another female, and if you're single, take your mother along on your dates, guys.
Posted by A Modest Scribler at 2:00 AM

Like you, I detest the actions of men that accost females. That said, the current environment must be very similar to the attitudes that prevailed in Salem, Massachusetts in 1692. The enthusiasm with which every allegation of improper behavior lodged by any female is met with should be disturbing to rational people. The Weinsteins and Spaceys of the country deserve their fate, but many others do not. There is no proof of almost all of these charges, but that seems to be irrelevant. The best response to this I've seen so far occured about two weeks ago when Ryan Seacrest was accused by a woman of not stopping when she said "No". Seacrest didn't mince words as he responded with "She's lying. That never happened, and if she keeps repeating this, I'll sue her for slander." The woman shut up immediately. This is the crime of the month and will recede as soon as the next popular complaint emerges.

Yes, Randy, the "guilt by accusation" phenomena is the most frightening, followed by the new trend of fucking one's way to the top, then declaring she did it because she was in a subservient position. Hell, that'll work for 90 percent of the America populace in some way or another. Thanks for your comment.

The casting couch has been with us for many years. What's going on today shouldn't be a surprise to anyone. This is the ladies opportunity to "get even". Changing stories "just a little" turn what really is, no big deal into something salacious and perverted.I personally believe 99% of the issues brought up are non issues. Rape is another story. So is feeling someone up(or worse) when they are asleep. This is all brought on by the Left. It's their next chance to take Trump down after Russia collusion didn't pan out. In a court of law, most these women would be thrown out for lack of evidence.

Agree with half what you said, Frank. But we have real video of what Trump thinks about women so I'm not giving him a pass on it. I do agree that Trump has given them an opening to maneuver this into the policy realm, instead of the personal. That's the fault of both.