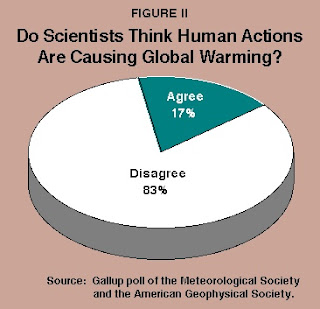 Wow! When you poll ALL climate scientists (not just those on government payrolls around the world) you find that, according to a Gallup survey, 83 percent of them don't believe human activity has a thing to do with it! Who knew?
And again, Wow! When the smartest scientists in the world (those who work along side NASA) take out the volcanic eruptions out of the mix (the natural disasters we can do nothing about), again it looks like we are exactly the same earth temperature we were 23 years ago.
Who knew? (Could it be those government paid global warming folks are trying to keep their jobs?)
Excerpt: The University of Alabama-Huntsville study, conducted by climate scientists John Christy and Richard McNider, shows that not only is the temperature rising far more slowly than predicted, but that the Earth's atmosphere appears to be less sensitive to changing CO2 levels than previously assumed. How do the study's authors know this? They corrected a mistake that many other studies and model forecasts leave uncorrected: First, they used only satellite data, the most comprehensive and accurate temperature numbers available. Then, they took out the temporary, yet significant, impact of both volcanoes and the El Niño and La Niña climate episodes that periodically wreak havoc on weather around the world. Once removing the influence of those naturally occurring events, the study's authors were able to come up with a stable base temperature for the world. Doing this, they found that the rate of global warming currently was 0.096 degrees Celsius per decade — exactly what it was 23 years ago. This casts serious doubts on the dozens of models used in coming up with the U.N. Intergovernmental Panel on Climate Change's dire forecast of massive global warming based on rising levels of CO2 in the atmosphere, mainly from human activity. Given that CO2 levels have risen sharply in recent decades but the pace of warming has remained essentially the same suggests that CO2 doesn't have the warming effect that many models assume.