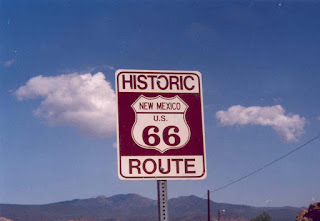 I was so pleased to read yesterday that the Feds,through the National Park Service, will installing new signing on the old Route '66. Though Congress will not be providing any funding for road improvement, at least with the signs, we'll be able to find where it still exists.
And Route '66, our old "nation's highway", the beloved "Mother Road" does still exists. I know....I've driven long stretches of it. In 1997, as I chauffeured my mother out to Missouri, to celebrate her 75th birthday with her brother, I nearly drove that dear lady crazy, detouring off of I-40, so many times en route. I toured those lovely old towns, pulling my van up to old horse hitchings, springing for lunch at the old hamburger joints still open, and winding down parts of old '66 that were not much more than horse paths. 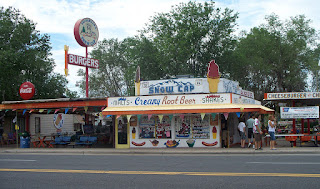 Though Route '66 was officially started in 1926, its roots run far deeper. In 1857 the War Department ordered a Lieutenant Beale, an army engineer, to develop certain East to West roads that might be used to herd camels bearing army supplies to army installations along that route, most of it running through the southwest.
Before 1926 there were no real roads for the recently introduced automobile to get from coast to coast. Then, in that year, Congress appropriated money to build that highway. When it was finished it originated in Chicago and ended at the Santa Monica pier in Los Angeles, weaving its way through the mid-west, through Missouri and Oklahoma and north Texas, then becoming pocketed oasis as it wound its way across Arizona.
And that "Mother Road" was a tremendous economic boon, providing construction jobs, expanding local markets to national, and, along that route thousands of businesses bloomed, to feed and house the millions of travelers hell bent on seeing the Pacific Ocean for the first time.
And it was on Route '66 where millions of Okies would weave their way from dustbowl to the promise of hope in the vineyards and cotton fields and citrus orchards of California. It was the Mother Road that carried my own family to California. We slept on the side of the road, and ate our baloney and potted meat sandwiches on the side of the road, and four year old me sat in the back of a tarped pickup truck, watching the miles fade behind me.
And it was the great adventure of my young life, drinking from canvas bag, or gallon pickle jars, and inhaling the sweet scent of sage and creosote along the way.
Route '66 was officially "retired" in 1985, the then mighty I-40 having already stolen away the gas and hotel and hamburger business...for travelers in a hurry to get somewhere else....no longer satisfied to stop and smell the roses.
But I've traveled the Mother Road. And I have found peace and contentment on long stretches of that old road. I have wandered down that old road, then pulled off, shut the engine off, reveling in the ghostly silence. and I would gaze at that aged asphalt, and remember a time when the wheels of our old pickup rolled across that ancient asphalt as it carried us East to West, or West To East....to attend funerals, then to carry us back home..the memories of the road resonating in our hearts when our heads hit the pillow for sleep.
And, some 65 years later, that Mother Road still calls out to me in clarion song.
Posted by A Modest Scribler at 2:00 AM