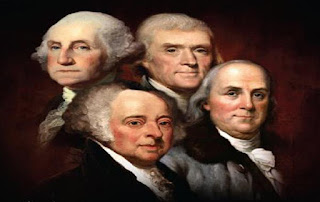 So, having spun out of their graves, George Washington, Ben Franklin, and Thomas Jefferson have pulled up their pantaloons and are sitting on the bank of the Potomac, cooling their heels in that historic river.

Ben, sloshing his fat feet in the cool spring waters, says to George and Tom, "have you guys about had enough of this revisionist horse shit the liberals are stirring up?.  I mean, really, these nitwits judging us by a standard in vogue two hundred years later is a bit much, isn't it?"  Tom just sits there, sphinx-like, staring into the waters.  "I know, Ben.  I suppose we'll be demonized a great deal more before this is over."  George, a bit uncomfortable in his bare feet, writhes his toes through the fresh spring grasses, then says "Admittedly, you two rascals are proper fodder for some latter day criticism but, for my entire two terms I tried to set a noble precedent for Presidents who came later."

At this both Ben and Tom began snickering, both of them thinking about the guy who just got elected in 2016.  George blushed and said "Yes, laugh if you will, but it's not my fault that so many of those who followed me weren't much up to snuff.   You guys stay up to date on the latest national debt?  Gracious, Bush and Obama ran up two thirds of that debt in a mere dozen years...........more than the other 40 or so Chief Executives combined!'

To that, Tom looked knowingly at his fellow founders.  "You might remember that I was the first President to pay off what George and John ran up in your dozen years.  Too bad my example wasn't followed".

"Settle down boys", said Ben, "you know it wasn't the national debt that spun us out of our graves..it was those ignorant nincompoops sitting up on Capitol Hill that riled us up.........that and those silly twits that want to haul our memorials down to the Potomac and send them to the bottom."

Tom, the smartest of the three, by far, said "you know, even here in the afterlife, we still have a little pull. What say we give these idiots a little of their own medicine?"

"What do you mean? queried George.

"Let's out these liberal idiots!" answered Tom.  "Let's show the world what hypocrites these folks really are!  Let's spread the word about how that Hollywood is full of sexist beasts, even as they brand conservatives as hateful toward women.  Let's show the American people who the real enemies are in that war!"

"Wait a minute, Ben, you groped your share of French lassies as I remember.  And you weren't shy in groping the Philly ladies either,  if I recall correctly", says George.

Tom interrupts, "look guys, we've all got our failings.  God knows it's been whispered about for a couple of centuries.  But those 21st century hypocrites are the worst!"

"Okay", says George.  "We're agreed.  We lift the lid and expose these two-faced politicians for who they are.  Should we bring old John into this?"

"Hell no!" screamed Ben.  "That self-righteous prude would be hell to work with.  You think he didn't grope a little Parisian ass while away from Abigail over the years?  I say we leave him out."

"Okay", agreed George.  "When should we start the ball rolling?"

"Now's as good as any", Tom declares.  "Let's start with Hollywood.  Then we'll out the liberal TV ilk.  Then, for the grand finale, we'll start on Congress.  By the time we're done half of those hypocrite bastards will be out of a job and Hollywood will be making hand puppet movies."

"What about that Ginger Head down at 1600 Pennsylvania?", asks George.

So Ben looks over at his two comrades, and whispers "one battle at a time, George.  Didn't you learn that during the war?".

Just as the three began discussing their plans, up walked General Lee.  "Couldn't help but overhear your discussion men.  Got room for a fourth?"