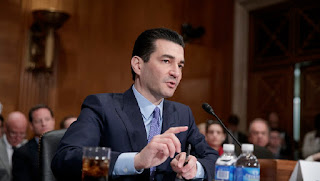 Going criminally unreported by the liberal mainstream media, someone in Washington stood up on his hind legs this week and did something for the little guy.

Donald Trump's Food and Drug Administration Chief, Scott Gottlieb just declared a new generic drug policy that knocks greedy drug manufacturers flat on their ass.  The FDA has revised the decades old policy of allowing drug manufacturers to claim monopolistic hold on drugs that had their patents expire decades ago, or in some cases, where drug companies have already realized billions in profits..profits that far exceeded their research costs and reasonable expectation of profit.

The FDA has announced seven major classes of drugs, comprising dozens and dozens of specific drugs, including the most effective against heart disease and cancer,  and will allow generic manufacturing of all of those drugs, with the set point being "three"...three separate generic drug manufactures for every medicinal.

It is also interesting to note that Gottlieb received only four votes from Democrats during his nomination hearing in January, when Trump named him to the post.  Democrats claimed, since Gottlieb once worked in the drug industry, he would not be an advocate for the American people.

It should also be interesting to note that, in the long history of the FDA being run by political bureaucrats. not one FDA Chief ever stood up to the industry as Mr. Gottilieb has, in forcing price reductions in the marketplace.

Chalk one up for The Donald...and a huge pat on the back for Scott Gottlieb.
Posted by A Modest Scribler at 2:00 AM