A trillion here, a trillion there.... 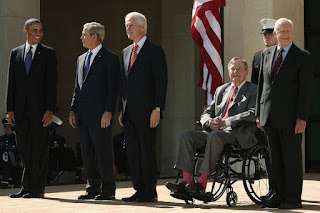 Try to imagine the biggest turd that ever dropped from your ass to the toilet bowl.  Now imagine someone taking that turd and hanging it from the top of your head, then forcing you to walk around with that scat hanging right in your face twenty-four hours a day.

That is exactly how Americans should feel about our $20 trillion dollar national debt.  The debt is now so massive, even the concept of $20 trillion dollars so vastly unimaginable, we simply ignore that huge turd hanging in our faces.

In order to grasp just an inkling of how our debt became such a mountain one need only look at our last two Presidents.  George Bush, on two major shopping sprees; the more than $3 trillion spent trying to democratize the Middle East, accompanied by his liberal-pleasing prescription drug bill, spent some $6 trillion dollars less than what the government took in revenue.  Barack Obama went Bush a bit better...spending $8 trillion more...on massive expansion of welfare, food stamps, and in making disability a virtue.

So, let's give old George and Barry credit where it's due...more than two thirds of the entire national debt was rung up by those two in 12 short years...accomplishing what 40 plus previous Presidents were able to do in the previous two hundred plus years.

You might be interested to know that Silent Calvin Coolidge was the last President to preside over an America that was debt free.  The Great Depression of course ended that, and Franklin Roosevelt used that Great Depression to run up a government tab that first lit the fuse that would eventually lead to the massive explosion of federal debt ever since.

I find it interesting that liberals continue to revive the old charge that Ronald Reagan ran up the national debt.  And he did!  But Ronald Reagan at least got something for his spending....the build up of a military in disarray and the complete dismantling of the Soviet Union.  And let's face it; Reagan's $1 trillion dollar debt is chump change in comparison to the last two Presidents.  Ronnie's debt reminds me of the fellow who found out his wife's credit card was stolen and was glad about it...saying "the thief is spending less than my wife so I'm miles ahead!"

Retired Senator Tom Coburn, (R), Oklahoma, spent his entire Senatorial Career trying to curb spending; citing specific programs where the fraud, waste and abuse was rampant.  Colburn paints an even darker picture....the $120 trillion dollars in unfunded liabilities (Social Security, Medicare, Military Pensions, etc).  No one listened.  No one's listening now....and we have that giant turd hanging in front of our nose...and we just keep ignoring it.

We can't ignore it much longer.  The interest on that debt will soon force America to make hard decisions...decisions that will force our government masters to cut spending on social programs just to make the "minimum payments" on our debt burden.  Given that fewer Americans these days are willing to actually work for a living that's gonna result in social chaos such as you've never seen.

bashing Republicans and Democrats in the same post! and rightly so. I wonder who profits from this National Debt? I suspect it is more than politicians wanting to make us happy. Here is how I got out of debt years ago and stayed that way: I worked Really Hard (ie increased revenue) and learned to cut back and spend less on Everything. for the Government that could translate to a 10% cutback AND increased taxes. Everyone would complain! OK, cut everyone else but not me! From a business point of view some debt makes good sense. It is always good when you can increase your assets with someone else's money!

Jerry, there's a decade old proposal that's been floated numerous times. Called the "penny rule", it proposes that you cut every single program by 1%. In seven years doing that you balance the budget. And yet our pols won't do it! Instead they come up with even more programs to spend on. Sad.