Time To Take Down The Lincoln Memorial 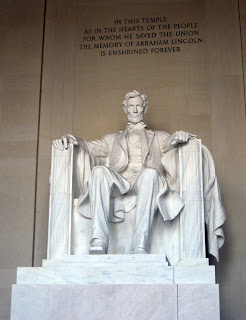 In an era where men, dead for two centuries, are now judged not by their own era, but this one, we need to reevaluate those we revere in marble.

Thomas Jefferson?  Perhaps the most brilliant human that ever walked this continent has had his name dragged through the mud for two decades now.  George Washington?  The fellow whose every move as President was plotted out...his intent to to set a noble example for every President to follow...Washington...hero of Valley Forge and Yorktown...was a slave owner, ergo...a demon.

Isn't it remarkable these days that America raises a small army of Black thugs to the highest pedestal, then denigrates our nation's founders.  Somehow it has become more noble to attack cops and burn town centers than it was to write the Constitution, the Declaration of Independence, or suffer through a bitter winter at Valley Forge.

By all rights, Abe Lincoln ought to be next to have his memorial removed.  After all it was Lincoln himself who said:  "I will say that I am not, nor have I ever been in favor of bringing about, in any way, the social and political equality of the white and black races".

Lincoln also said on several occasions, most particularly in his letter to Horace Greeley, "If I could save the union without ending slavery I would do so."

That statement alone ought to warrant having Lincoln's memorial dragged into the Potomac muck...right along with Jefferson and Washington's monuments as well.

Perhaps we can scrap the statues and memorials of all these dead white men and erect statues of an angry black with looted boxes of Michael Jordan basketball shoes in their place?

Last month, when I saw the political lackeys down in New Orleans haul General Robert E. Lee's statue from the public square I was both saddened and angry.  I wish they knew General Lee as well as I do.  I wish they had read about how General Lee wept when he heard of Southern Secession, how he mourned for his country and why he resigned from the Union Army, his heart just not into turning a sword against his beloved Virginia.

Sadly, the brown shirt liberal savagery of the day precludes the study of history...both the bad and the good....or of the nobility of judging our forebears by the times in which they lived.  Someday these same ignorant thugs will be judged too....and I don't believe they'll be regarded very well when the history of these times are written.

Yes, it is sad, and not reading is a result of an uninspiring and horrible education system.
And just the laziness of the times, I suppose. We will pay dearly for this.

The revision of history continues. Coupled with the popular notion that people have a right not to be offended, the result is predictable: A double standard that must never be questioned. Of course, the afrothugs are adament that slavery must always remain at the forefront of our social consciousness when addressing any aspect involving the non-whites among us. The term "racism" is much like the term "wolf" - used to excess by someone with a vested interest, to the point where it has become white noise for most thinking people.

How very true. How very sad. It is indeed a shame that people look at only a small part of a person's life to judge them.