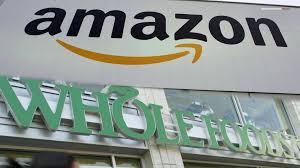 Last Friday morning, when it was announced that Amazon is buying Whole Foods, all the other grocery chains stock prices crashed.  And for good reason.  Amazon, with founder Jess Bezos spurring them on, has transformed retail.  We see it in the declining prosperity of shopping malls and, for the good, surviving retailers working hard to no longer ignore us.

I've been a fan of Amazon for more than 20 years now.  Have bought books, video, Kindle reading devices and a whole plethora of other things.  And, in those 20 years, I've never walked away from a consumer purchase dissatisfied.  Yes, I've bought some "duds" from Amazon, but in every instance they've gone out of their way to make it right....either through a credit, a return, sometimes even giving me something extra to soothe my concerns.

I just happen to love Jeff Bezos' favorite saying; "the customer will, in all instances, expect more than they deserve, and it's up to us to make sure they get it!"

Now, with Whole Foods, Amazon gets a slightly snooty grocery with good organics, and stores stocked with stuff likely good for you.  The problem is that their prices are too damned high.  Bezos will fix that.  Using Amazon's gigantic supply chain and massive buying power, they'll have those prices lower than Trump's poll ratings in a couple of years.

And, within that two years, you'll find that you will have several options for shopping at Whole Foods.  Using Amazon's proprietary purchasing technology you'll be able to order online, or if you want to drive to the store and pick it up, already bagged and waiting, you'll have that option.   Or Amazon will deliver your goods right to your door if that's your want.

Amazon, since its founding, has bought more than a hundred companies....to either enhance their retail technology, or to expand into other retail and service lines.  So, yes, Walmart and Target and Sprouts and Albertsons LLC, and all the other grocery chains should be worried.

There are those who say "when a company gets too big they eventually begin crumbling from within, unable to manage an entity too large."  That will certainly prove true for Amazon too...their very name perhaps predictive of that inevitable decline.  But they're not there yet.  And they can stave off failure as long as they keep giving the customer what he wants and doing it at a competitive price and with a pleasing means of delivery.

Yes, I agree, I Love Amazon too. But I sometimes wonder, should I?
I never have to leave the house now. They already know what I am thinking.
Soon enough I won't even have to ask. Then they will tell me what I should be wanting...
and what is good for me.

One small flaw I found in Amazon, Jerry, is the difficulty in finding someone there who might listen to a suggestion. While their excellent customer service is tied to product purchase it is extremely difficult to elevate suggestions to someone who might have a role in implementing it. For example, I subscribe to a little service called Early Bird Books. Each morning I get an email providing a list of books offered from six book retailing sites of titles available at a steep discount. I emailed Amazon and asked why they didn't provide the same specific service, tailored to the kinds of books they know from my buying history what I liked to read. I could find no one who even understood the concept and the only customer service reps available were working on customer retail issues. Does that mean Amazon has gotten too big? I don't know.