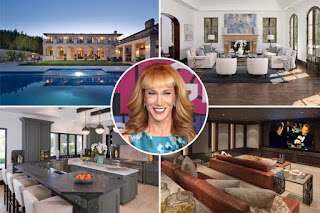 The pics above are of "comedienne" Kathy Griffin's Belair, California $10 million dollar estate.  She has accrued a fortune criticizing, demeaning, and making fun of conservatives and conservative politicians.  She is a millionaire a hundred times over from the simple means of tearing down.

So, on Friday, when Kathy appeared before the cameras and began sobbing about Donald Trump destroying her, I was a bit taken aback.  Hmmm...did Trump force her to hold up a bloody Trump head for all the world to see, including the President's rather gentile wife and eleven year old son?  How in the world did Griffin turn from "aggressor" to "victim" in two short days?

Well, folks, we know the drill.  If you're a liberal, and you screw up, and if enough decent people turn on you...enough to affect your income, you immediately claim "victimhood".  That old 'victimhood' saw has always been the "free pass" that liberals give themselves whenever they act up.  And it doesn't much matter the act...whether it was Barry and Hillary's allowing Americans to die in Benghazi, or Michael Brown's convenience store robbery and follow on attack of a police officer, or the hundreds of Hollywood drug busts that get swept clean each year.

Conservatives, when they screw up, may as well make a will...cause their dead forever.  Liberals, on the other hand, need only plead any number of excuses, claim a newly discovered self-redemption, and can rake in more millions with next year's "redemption tour".

Even as we speak, Kathy Griffin is lining up a team of high powered Beverly Hills lawyers and a small army of publicity agents who promise to have her reputation scrubbed clean within 12 months...or her money back.  And thanks to the vast decline in American morality, and the penchant for liberals to forgive their fellows, look for Kathy to sign a one year gig at Caesar's Palace by this time next year.

She has never been funny and her voice is worse than fingernails on a chalkboard.

She just has the one house?

Craig, I put the word "comedienne" in quotes because I didn't find her funny either.

Yes, Jerry, as far as I know she's only got the one shack.