Glory To Those With Their Hands Up 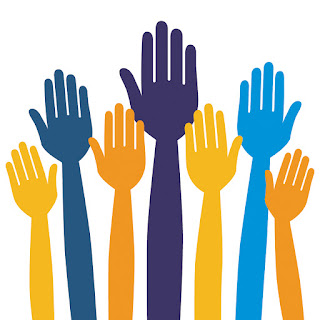 One of those beautiful "light bulb over the head" moments came to me as I read my Saturday morning paper this weekend.  Three little news tidbits provided lots of thoughts about our modest roles in society.

The first bit of revelation came in the form of a little block on the business page.  Seems some survey wonks took a poll of recent college graduates and found that 54% of last year's college graduates cannot find a job that matches their university degree.  Being kind today, I won't editorialize on that particular fact.  Suffice to say that a Philosophy degree will not get you into the door at Qualcomm.

The second newspaper item came in the form of a letter to the editor.  The author, a retired gent, now serving as a volunteer for the Salvation Army, was decrying the cruelty and snark that exists in social media these days.  Seems the gent was on Facebook, offering his personal opinion about a community issue.  Within minutes someone had scanned the gent's profile and wrote:  "oh yeah, brilliant wisdom from someone who works at Salvation Army".

The third newspaper article involved a two page spread, alerting the community to the impending high three digit temperatures arriving in Phoenix this week.  The article warned newcomers to limit their exercise to early morning and advised everyone to stay hydrated.  The article then went on to talk about how difficult it is for the homeless to avoid the heat and find enough water to do so.

Well, my aging brain began to collate all of that information.....the disparity between Philosophy degrees and engineering jobs, that harsh criticism of one who does volunteer work, and then the seemingly unconnected stuff on worrying about "watering the poor".

And, the results of that collating was this.  That Salvation Army volunteer is going to be busy this week.    Seems the Salvation Army is collecting huge truckloads of donated bottled water and have set up more than a dozen "watering stations" around the county for the next week.  They'll be passing out water from morning to night to those who own no personal source to keep cool and avoid heatstroke.

So I wondered just whose fulfilling a more valuable role among the players in this little scenario.  The "Philosophy graduate" flipping burgers and living in Mom and Dad's basement?  How about the snarky fellow who looks down at Salvation Army volunteer work....will he be occupied bettering the lives of his fellow men...or too busy keyboarding social media snark to get involved?  I'm betting the gratitude is going to go to that Salvation Army volunteers that's passing out water this coming week.

Just a few musings on Father's Day weekend..........to honor men who strived to do good...whether it be CEO...or Salvation Army volunteer.

Added note:  I have a friend who reports to the local animal shelter each morning...to walk pound dogs and pick up dog shit.  I admire him more than almost anyone I know.


wow, we would be two old fuddy duddies sitting on a porch somewhere! I so completely AGREE with this post, it is as though you stole it out of my head! Stay Cool, my friend!