On TV; The Great Wasteland 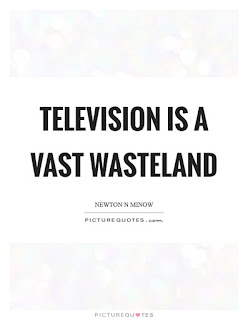 Don't know about you guys but my TV viewing in the last couple of decades is somewhat eclectic.  I find myself somewhat like a junk yard dog, picking through a huge mound of garbage to see if I might find something digestible.  That problem is compounded because, having lived for a decade in Saudi Arabia, I pretty much missed the TV of the 90's.

While missing an entire decade of TV brilliance, I have to admit to having discovered little pockets of brilliance long after they entered "re-run land".  For instance, my wife and I, for two solid years, ate our dinners on TV trays while watching re-runs of "Everybody Loves Raymond".  Between Raymond and Seinfeld we pretty much did the 90's in the first decade of the new century.

Then, a few months ago, I was channel flipping and came across a charming little show called "Picket Fences".  I fell in love with that wild and wacky show and had to order previous seasons on Amazon to get my full fix.  And it was only last year that I discovered that Tim Allen has grown up, become conservative, abandoned those three boys for three luscious, sexy daughters and a sassy wife, and is even funnier as Outdoor Man than Tim The Tool Man.  Alas, Tim Allen was hitting liberals where they hurt on his nightly "Vlog", and the liberal masters at ABC cancelled his ass, even as he rode the top of the Friday night ratings.  I'm now relegated to watching the 97th viewing of each episode over on the Hallmark Channel each evening.

Other than an occasional Andy Griffith, or Perry Mason over on the retro channels, I pretty much stay with C-Span Book TV, baseball games and "Film Noir" festivals over on Turner Classic Movies. But I do keep finding little nuggets of brilliance while channel flipping.  Just last month I discovered a quirky little fellow named "Monk"...a man who suffers more OCD symptoms than seemingly possible, whose escorted around San Francisco by a pretty nurse who fills out the seat of her Levis in spectacular fashion.

Any of you also suffering from enduring The Great Wasteland?  Anyone a bit saddened that 80% of today's programming is comprised of graphic autopsies, singing and dancing wannabes and Black mob bosses?

Anyone got some bootlegged "Amos and Andy" that they wanna share?

You can probably buy a set of Amos and Andy online.Watch "Shark Tank"once in a while and sports. That's it. TV goes on about once a month sometimes 3-4 months in between. It's crap. All crap. Glad I have a computer. I can pick the news stories I want to read.

Right with you, Frank. Maybe someday the rest of the world will get it. TV crap is depressing. Just read this morning that 7 million Americans believe that chocolate milk comes from brown cows so what can we expect?

Mostly, TV programming varies between insulting and just stupid. I grew up with three channels (and occasionally the "Educational channel" if the rabbit ears were positioned correctly). In high school, we got cable - 32 channels, and I wondered how I would ever be able to decide what to watch! Today? Literally hundreds of options, yet the content is garbage. I do watch some Discovery shows, National Geographic (Dr. Pol - great show), and my boys like The Flash. It is, in large part, a reflection of our society. How sad.

To quote Forrest Gump, Randy (the last movie went to a theater to see), "Stupid is as stupid does"...and the programmers know it.