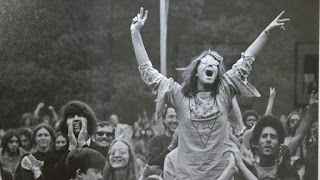 "If This Old 'Wise Ass' Could Deliver Only One Sermon To The Young"
If I could deliver only one sermon to the young, before I ride off into the sunset, it would be "don't take yourself, or your cultural icons too damned seriously".
And my "sermon" would employ the parable of "The Summer of Love" of 1967. Let me tell you kiddies, I was there, out on Haight Ashbury when that first generation of hippies were openly smoking dope, fornicating in the park, and deriving more meaning than was intended from the hard metallic rendering of Jefferson Airplane and Janis Joplin and Big Brother and The Holding Company.

Admittedly, I was there, in San Francisco, as a hayseed from the San Joaquin Valley. I had never smoked dope, enjoyed only music when I could understand the lyrics...basically a "square".
And while the concept of openly fornicating with good looking strangers...down on Haight Asbury, or at Woodstock, sounded enticing, I fear I would never have been able to "perform" with an audience of ten thousand watching me "hump".
Now the cultural pundits said the Summer of Love, and hippiedom, was more than smoking dope and fornicating. They said it was about advancing women's rights, being anti-war, and expanding the civil rights of Blacks.
Well, this summer, on the 50th Anniversary of that Summer of Love, I confess that I still don't get it....even after 50 years...half a century of harvesting wisdom.
Hear me well youngins....it wasn't those hippies that won civil rights for Blacks...it was a 30 something Black preacher named Martin Luther King who faced down fire hoses and attack dogs down in Birmingham who won those rights. And it wasn't Haight-Ashbury who won women their expanded rights...it was the succeeding two generations of women who fought for it in the work place.
As to the "Summer of Love's" open fornication practices, well all I can say is that the San Francisco free medical clinics reported an explosion of venereal disease that took more than two years to bring under control.
How about the hippie anti-war effort? What was won there? Well, aside from a few thousand guys who got laid for burning their draft card, most young men in America would end up fighting that war for eight more years...hardly a victory there.
How about my generation's cultural icons...those folks who led in that "Summer of Love?" Well Janis Ian, and Jimmy Hendrix and Jim Morrison of The Doors were all dead before the next decade ended!
How about those who survived? Well, you are seeing more and more of those "cultural champions" these days...in the obituary columns. And should you be surprised that these old "heroes" died from the same unspectacular ailments that do the rest of us "common folks" in?
And how about the "ground troops"....your grannies and granddads? Would you be disappointed to know that those old hippies became every bit as materialistic as their parents? Having been blessed with inheriting the wealth of their "Greatest Generation" parents, those hippies played the stock market boom of the 80's...investing in Defense Companies and good ole Dow Chemical...companies that they once purported to hate...but then came to love those 7 percent annual dividend checks!
And that same hippie generation played the materialistic stock market during the 90's tech boom and bust...and many of them lost the wealth their parents had left to them, then, seemingly unable to learn from their mistakes, played that wild and crazy real estate boom that eventually led to The Great Recession of 2009 when virtually all the big banks went bankrupt!
Here's my point, young people. Stop worshipping Beyonce, and Jay Z and the "Hollywood Resist" movement....they don't have any better answers than you! Nor does Hillary, or Bernie, or The Donald.
Instead, find your own "center"...that area of the soul that tells you what's moral, what's fair, what's humane...and listen to that center as keenly as you listened to first cry of your infant.
Sadly, if you don't, you'll find your cultural icons are, in the end, merely mortal....succumbing to diabetes, heart disease, foot bunions and irregular bowel movements.....and always knew even less that you.
To borrow a phrase from the Good Book...that tome that half of your cultural icons despise........."do unto others"...and you'll be okay.
Sermon over. If you listened, thanks. If you didn't, don't worry....you'll get it ...in half a century or so.
Posted by A Modest Scribler at 2:00 AM