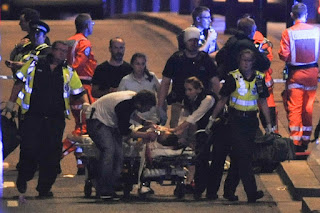 Machetes 55-Open Carry 0
Seven people dead, 48 wounded over the weekend as Islamic terrorists crush fellow humans with their van, then get out and begin hacking to death late night revelers in London town.
None of the victims, or anyone nearby were openly carrying a persona firearm because firearms are not allowed. As helpless victims ran for their lives there was not one person available to lift their Glock and stop the madness.
London is not alone. Many of America's liberally managed cities have the same stringent gun laws, making themselves vulnerable to further mass massacres in the future.
London Mayor Sadiq Khan insists that all of his Muslim constituents are peaceful and should not be "marginalized" by having their personal lives intruded upon and insists the three attacks in three months should not stop Britain from importing more Syrian refugees. 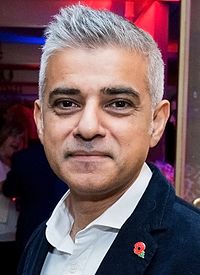 Sadie says he'll look into banning knives and vans in an effort to quell the violence. As Sadiq spoke he was surrounded by a heavily armed security detail.......a privilege not available to the folks he was speaking to.
One person...one personal Glock might have prevented the slaughter.
ALERT! ALERT! ALERT! I have no more tears, nor sympathy for those who tolerate Islamic terrorists in their midst and stand by like lemmings as their politically correct leaders lead them to slaughter.
Sigh.
Posted by A Modest Scribler at 2:00 AM

I hate to see the World this way but maybe it is time for them to see if there are Really 72 Virgins waiting for them.

The more, the merrier, Jerry.

PC is literally killing people. As long as the public allows this murderous subhuman race to live amongst them, out of fear of being called "intolerant" or "bigoted", when people continue to be denied the ability to defend themselves with their own weapons and support the practice of doing so, like you - NO MORE TEARS. The UK dominated the world for several hundred years. What a sad shell of themselves they have chosen to become. Make no mistake - the liberal pols want the same for this nation as well: Unarmed, apologetic, and submissive (Not for the pols themselves, though - they're different and require armed security 24/7). Trump has plenty of faults, but calling these people out for just what they are is one of his strengths.

Randy, I'm sick to death of seeing the flags of Britain and France posted on Facebook with tears flowing and words such as "we ae all Brits, or we are all French". They are what they are and no tears required.