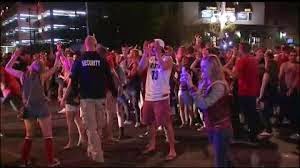 Last Saturday night students from the University of Arizona in Tucson filed out into the streets and rioted.  Their cause?  Their team lost their Elite 8 match in the NCAA Basketball Tournament.  I'm not surprised; this is what spoiled liberal kids do....and Tucson has been a liberal mess for a while now.

Keep in mind that Tucson is where greasy and rotund and corrupt Congressman Raul Grijalva hangs out...he's the one that called for an economic boycott of his own state because we want to deport illegal Mexicans.  He's the one that shows up twice a year for some liberal controversial vote, and spends the rest of his time in southern Arizona wandering from one Mexican restaurant to another scarfing down their biggest combination platter.

Tucson is the town that drives working class citizens away by assessing them huge property tax demands to fuel per student school costs that are twice the the rate of any other city in Arizona....$20,000 a year for every illegal Mexican head so that they might learn the English language and join the mainstream to learn how to add, subtract and keep from multiplying too rapidly.

The Tucson school district was so radical that they fostered the infamous "hate gringo" Hispanic studies program that ignored all of American history except for the Treaty of Hidalgo when America stole their land for $15 million dollars.  Radical communistic teachers ignored state issued text books and mimeographed their own little 'hate gringo' syllabuses and the glory of Che Guevara and Fidel Castro.  Each day the students exited the class ready to maim a gringo.   It got so bad that the State Secretary of Education threatened to withhold state funding if these hate fests continued.  Eventually the case was settled in court and the Tucson School Districts sins were so heinous that even the liberal 9th Circuit Court of Appeals held for the state and halted the ethnic hate courses.

Perhaps Karma does exists.  You see, these liberals down in Tucson absolutely hate the U.S. military. The institution goes against the grain of their slimy little philosophies.  You would think then, that this bastion of liberalism would be all too happy to see their local air force base disappear in the vapors of the desert....not so.  You see,  Davis Montham Air Base provides billions in economic activity down that way.  Between the defense contractors like Raytheon and Boeing, and the air base, thousands of Tucson folks have good paying jobs.  And thousand of military folks buy food, houses, cars, eat in the local restaurants and shop in the local community.

But now, Secretary of Defense Chuck Hagel is hell bent on closing more military bases to reduce the defense budget....and guess who's on the hit list?  Yep, good ole Davis Montham Air Base.  The Defense Department will just drag all those boneyard planes out to the Mojave Desert, or they'll simply contract with a civilian security firm to watch out for all those old airplanes...and shut down all the rest of the base's tenant units.

Guess what?  Tucson is up in arms about this!  Even the "Mexican Combination" aficionado, Raul Grijalva is upset!  How dare these right wingers take away the very tit we hate...but suck on with great gusto!

Well, it looks like the big "Karma" is getting ready to bite Tucson right in the ass.  And even "Juan McCain" may not be able to save them!

What then will become of Tucson?  My guess, since they've driven away those who have already left to avoid obscene property tax rates, will be an illegal Mexican barrio that would fit right in with Nogales just across the border.

Two years ago, in a fit of pique over their hate filled "Ethnic Studies" program being killed, Tucson proposed splitting the state in two; with Tucson being the capital of South Arizona.  I know a lot of folks up here in Phoenix that would vote for that in a "Tucson Minute".

So, riot on kiddies!  Sadly, you'll soon be crying over a lot more than the loss of a basketball game.

I am not sure whether today's youth is capable of rioting over anything more significant than a basketball game. Maybe if they lost their Nintendo or cell phone? You could shut down the libraries and they wouldn't even notice. If it is not Whitey's fault its gotta be Obama's. right? maybe if they had played better basketball? but why look inward when there are others to blame?

You raise an interesting point, Jerry. It is hard to get young people committed to anything other than their IPhone and gaming system these days.

Though I will say most of those "occupiers" were young people so they do get up in arms occasionally.