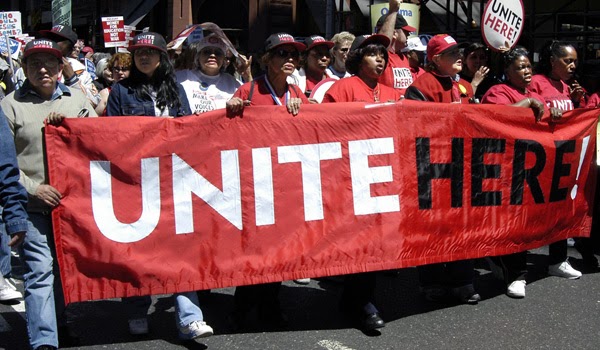 One of the nation's biggest unions is up in arms over Obama and his infamous and fatally flawed "Affordable Care Act".,,, hereafter called Obamacare.  Unite Here, made up of over 265,000 restaurant, warehouse, food service and casino workers, are crying foul as employers have begun reducing their work hours to 30 per week, or withholding over $5 dollars per hour from their pay to cover their health care premiums under Obamacare!  More will lose their jobs entirely with the remaining workers expected to do more to cover the loss of manpower at their assigned work places.

Much of the pain is being felt in Las Vegas with those tens of thousands who toil in some manner of the casino trade.  Nevada's Culinary Union Local 226 is threatening to strike, with the key grievance being Obamacare.  Members said they'll hold out for stopping Obamacare and go back to when they got free health care and had forty hours per week, instead of their current 30 hour work week.

Sadly, there is little the workers can do.  Obamacare is the law of the land the employers are simply complying with the Obamacare laws in all their complex mutations.  When Obamacare ended all tax subsidies for employer paid health care that ended the free ride on the gravy train.

Unite Here has already voted to strike in a valiant effort to reject the costly Obamacare premiums they are being forced to pay and want their lost pay and work hours restored as well.

According to Alex Torres in the National Review, workers at all levels are furious with their new working conditions.  And rightly so.  In the 2012 Presidential election Obama carried Nevada by 7 percent, and in Clark County, home county for Las Vegas, Obama carried that county by a whopping 17% over Mitt Romney.

It seems that the Obama kool aid has worn off and the unions feel betrayed.  It seems things are not quite as rosy as Obama portrayed them on the stump before the 2012 elections.  Hispanics have "doubled down" on their anger since Obama promised them free health care and citizenship for their illegal brethren, neither of which has come true.  Ironically, Mitt Romney told them what would happen during his many campaign stops in that state but voters were too drunk on the Obama kool aid to listen...they branded him a liar.

Newsmax yesterday reported that Nevada Senator Harry Reid is trying desperately to appease his home state workers.  He's joining with Nancy Pelosi and the rest of the Senate Democratic leadership to attack Republicans on the issue of "income inequality".  And what did Unite Here union members say about that?  Here's their own words on the matter:  "The Affordable Care Act will heighten income inequality as our union workers are forced to work harder, with fewer hours, less pay, and for health care premiums that we cannot afford".

Pardon me, dear reader. I simply can't go on.  My crocodile tears are blurring the keyboard and I find myself unable to write another line.

Oh, maybe two more lines..."if you like your healthcare plan you can keep it"...and "ladies, how do you like paying for abortions and birth control pills for yourself, and the 30 million who pay nothing at all?"...remember that war on women? ...you just found out who your real enemy was on the war on women and it's biting you in the ass big time!

Yet these same morons will put Hillary in office, and while everyone calls it obamacare I clearly remember Hillary pushing this as first lady.

I know I have used this quote before, but it applies once again :"You can't fix Stupid".Maybe just maybe the unions will see that capitalism is better than socialism.

Unions have always practiced and defined the double standard. They always want fairness and claim to be for middle class families. I do believe the "chickens are coming home to roost". Collective fairness in all its' glory creates the proverbial "least common denominator". It will only be fair in the USA when we are all poor equally. The decline of our Republic is not an accident, I believe something very sinister is about to happen!