On Flags And Gays 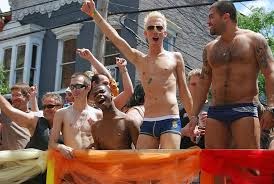 I'm having a hard time these days trying to figure the "new America's" sense of fairness.  Last week the ultra liberal 9th Circuit Court of Appeals in San Francisco ruled that school kids can be banned from wearing T-Shirts with the American flag on them because it might insult our illegal Mexican school kids.  The court ruled that school kids don't have the same rights to freedom of expression that adults have, and that celebrating the American flag might prompt Mexican kids into starting an altercation.  Therefore, in the interest of safety, (and political correctness) the court ruled against our American kids.

Meanwhile, across the continent, in New York and Boston, gays threatened to seek a court injunction from holding the annual St. Patrick's Day Parade in those two cities if they were not allowed to participate and flaunt their "gayness" to the masses.  Never mind that the parade is meant to celebrate Irish-American tradition, never mind that the parade has nothing to do with sexuality; these gay fascists want to take every opportunity to rub their gayness in the faces of "straights".  So the courts subtly indicated that, if gays were banned from the parade, there very well might not be a parade.

So, as nearly as I can tell, it's okay for illegal Mexicans to celebrate Cinco De Mayo, it's okay to wave the Mexican flag, but not the American flag.  It's okay to force Irish American parade organizers to allow gays to march in their parade....in fact if you don't allow it, you may not get to have one.

And it was not long ago when the city of Berkley, California protested the existence of a Marine recruiting office in that city.  The city council adopted an ordinance that proclaimed the Marines were not welcome in that city and awarded a "noise permit" and  "illegal parking permits" to an anti-military group known as Code Pink.  These permits allowed Code Pink to interfere with both foot and vehicle traffic in an effort to stop American citizens from entering the recruitment office.  The "noise permit" allowed thousands of protesters to yell, scream and create all manner of noise in an effort to drive the Marines out.  Thanks to the death of thousands of Marines those protesters have the freedom to express their hate and vulgarity.

Two years ago, in Arizona, the gay community decided that they would stage "sit-ins" in all the state's Chic Fil A franchises because the company sponsors programs that promote the American family and religion; the religion that adheres to the Bible's pronouncement that homosexuality is a sin.  Never mind that the restaurant has never turned away a gay customer, never mind that the restaurant's motto is to treat each customer in a kind and Christian manner, the gays insisted that Chic Fil A had to be destroyed because their beliefs did not mesh with gay fascism.  So the gays planned a huge "spit-swapping kiss in" in all Chic Fil A franchises just to show em who's boss.

So the Arizona legislature passed SB1062 a few weeks ago.  The law would have protected any business who might have a problem with "spit-swapping sit-ins" on their business premises.  It would have given businesses the right not to be sued for refusing service to the gay fascists who have boycotted and destroyed many Christian businesses who do not support their lifestyle.  But, from Emperor Obama on down the line, the liberal left brandished the law as discriminatory.  Obama went as far as to say it was the same as Black discrimination in the sixties.  (Oh by the way, businesses can still post those signs that say "no shirts, no shoes, no service".  They just can't stop gays from holding a "spit swap" in front of it to protest heterosexuality.

And I didn't see one single gay group jump on snowmobiles and offer aid to single stranded motorist. Guess that wouldn't be their "thing".

Fair?  America has lost her sense of fair play, right along with her morals.
Posted by A Modest Scribler at 2:00 AM

In a world gone mad.

I read yesterday that the Gov. of New Mexicos' hair stylist refused to do her hair because of her opinion of marriage being between a man and a woman, where is the uproar!The 9th District court just ruled Kalifornias concealed carry restrictions unconstitutional.It is past time to tell ALL these whiny special interest me me me ers to PISS UP A ROPE!

Yup. This is what "tolerance" has come to mean. This will only change when we stand up for ourselves and our culture of ACTUAL tolerance, not just tolerance of antisocial behavior.

Thanks Scrib, You got my blood pressure up this morning. This one pisses me the fuck off! How is it these cities allow this BS. You piss on others rights to allow a small group to have their 15 minutes of fame and annoyance. If my son went to the school where they banned the shirts with the American flag, he would have wore one until they kicked him out. This is bullshit, like what happened in bazerkly. Your right, those ASSHOLE would not have that right if it wasn't for the Marines fighting and dying for those rights. I hope those litard pussies can fight because when shit it's the fan they'll be the first to go. I so tired of this pc bs, let's get these libtards out of office and hopefully find some conservatives with balls! Ugh!

Craig, I hadn't heard about the gay hair dresser in New Mexico. Thanks for sharing...you're right...it's only discrimination when straights do it.

Anon, we need to learn to "tolerate" a little less.

Brian, I feel your pain. The gay insistence on marching in every parade is bad, the flag thing is bad... but I hit the ceiling last year when Berkley tried to run the Marines out of town.

We have become the Land of the Double Standard. I really do not understand how we have come to the point where I feel that I am EXPECTED to apologize for (in no particular order): 1) Being White, 2) Being Female, 3) Being Straight, 4) Being a Veteran, 5)Being a Patriot, 6) Being Middle-Aged, or 7) For Never Having Been Unemployed (and a gazillion other things I am/do). So in the interest of not "offending" any of these thin-skinned, lack-witted, high-strung emo-libtards, we are in turn being offended 10x over at every turn; where's the public outcry? WHO do I need to send letters to, assuming said recipient can even read? Where was I when the world took a nosedive into the toilet? Oh yeah, I was probably working my ass off to provide for my family, since that is what RESPONSIBLE AMERICANS are SUPPOSED to do. Silly me...

Karen, I feel all the frustration that you do. I vent my frustration on this blog, on various message boards and with frequent letters to my congressman and Senators.

I urge you to write your as well. If they are already like-minded your letters will further strengthen their hand and their spine and they'll fight that much harder for your political beliefs. If they aren't in tune with your beliefs it will give them pause before they vote for something that you're against. And then, try to find just one ally among your friends who will also write and speak out. If each of us recruits just one ally our voices will be mighty indeed.

We stopped that 2007 amnesty because we flooded Congress with emails, letters and phone calls. Never despair that or voices can't be heard.

Thanks so much for commenting.