Rocky And Me; Dreams of The Road 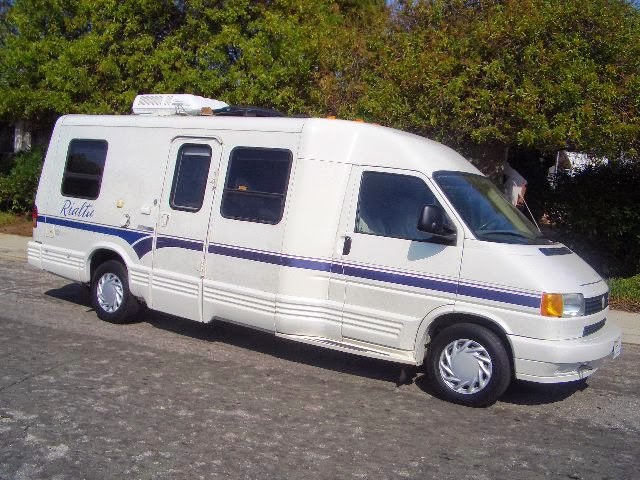 I now know that I will never fulfill my dream of running a marathon.  I won't even be taking those ten mile early morning walks anymore.  But, like the kid whose heart soared at the roar of trains, planes and automobiles, who longed to be on that night train that rumbled through town as I lay in my bed at night, I still have wanderlust.

I once owned a little Winnebago Rialta.  It got 20 miles to the gallon and it was outfitted with everything a large RV has, including, stove, refrigerator, microwave, a comfortable bed and even a bath and shower.  It carried me thousands of miles, to places I'd never seen before.  It provided shelter and sustenance on the blue highways of America, those secondary highways away from the roar of the big interstates, to villages and towns where people were friendly enough to welcome me as a stranger....admiring my little four wheel magic carpet and the lazy stretch of time that allowed such freedom of travel.  The folks I met, the waitress, the mailman, the store clerk, the teen at the fast food window, the old guy on the park bench, would all stare at me, look at my little rig, and then stare down the road as if they were hearing some ancient siren calling out to them.   Their thoughts were so intense, their lust for wandering so evident, you could almost hear the whisper of "some day...some day."

So, even at this late date, I am still inflicted by a lust for the road.  I miss my little economic Rialta and, these days, I find myself scouring Craig's List for a cheap little RV that I might again drive out to the hinterlands, perhaps this time just to say hello to all the fresh faces, new to me, and goodbye to all the people and places I hold dear.   I have no illusions that time is still a luxury.

I always travelled with my two Chi's.  Ginger, my oldest, has never been much of a traveler.  She simply tolerates it, is polite enough to not make trouble for me on the road.  Instead, it was my little dog, Rocky, who, like me, lusted after the road ahead.  All it would take to send him into fits of nirvana would be for me to pull my little rig into the drive way for a vacuum and a wash.  Rocky would hop into the RV as soon as I opened the door and park himself in some cozy corner and wait for the trip to begin.  Even after he suffered from degenerative disk disease, and his back legs would "cha-cha" to and fro, giving him little support, he would use his powerful front legs and chest muscles to "monkey bar" up the twelve or fourteen inches needed to climb into the Rialta.  And he would not leave until I convinced him that this was just a dry run, just a bit of upkeep on our magic carpet.  Sometimes I'd actually have to close the door and leave him to sit in silence in the RV before he would finally believe that we weren't going anywhere.

When we did set out on a trip he loved to sit high in the passenger seat and look out at the blurring landscape as we whisked our way to new adventures.  If we came to a red light stop, he would turn his head and look at the passengers in the other cars, as if to say, "aren't we special!".  People would look back at him, gesture to someone else in the car as if to say, "look at that cool dog".  Rocky took the admiration in stride but I was often tempted to get him a pair of cool sunglasses, so magnificent was his profile when he knew he was being admired.

Rocky left me on the 2nd of October of 2009.  Despite my tears he set off on foot, across the "rainbow bridge" and he has, no doubt, walked every meadow and back road his creator provides in reward for administering seven short years of unconditional love to various and sundry humans who were fortunate enough to know him.

So every day I awake, rebel at the domesticity of senior life and, in protest, begin scouring the ads for a reliable old RV that might carry me over roads not yet travelled, bridges not yet crossed, and meadows not yet walked.  If I ever find one I fear I'll climb in, find a cozy corner, and they'll play hell trying to get me out again.

Stop by OKC and get me on your journey. We can take Buddy & Molly to keep us company. You should see the looks they get, especially Buddy with that big black curly tail.
Another good story Cuz.

Good read! I was just sharing my thoughts on this very subject with my husband earlier this week. We both love the open road!!

In 2000 my wife to be and I left AZ to go back east, we went in my old suburban. Our 2 dogs, Bruno and Jax traveled with us, Arizona to Montana was done almost entirely on dirt roads, once we'd gotten as far as Ohio we just drove to wrap it. All in all it took three and half months, it was our honeymoon prior to getting married. We met so many great people and saw so many amazing things. When I retire that is how I intend to live.
Christ that was one great summer.

anon, you just made me wistful for travel all over again.

My parents bought a fifth wheel and traveled the country even up the AlCan hiway to AK. Even after dad was diagnosed with stage 4 lung cancer(Doc gave him 6 mos he got 3 1/2 years)they still traveled just planned it around chemo and other treatments. Hope my wife and I get a chance to explore as you and my folks did.

Craig, I hope you and your wife have the chance to travel like that as well. The military kept me busy seeing the world but I had never had the chance to really see my own country until I retired.

And if you don't go in an RV you really don't get the real feel for the country..by car or plane you're too busy managing "logistics"; booking hotel rooms and such...along with the temptation to veg out in a your hotel room...with an RV, it's all right outside your coach window.