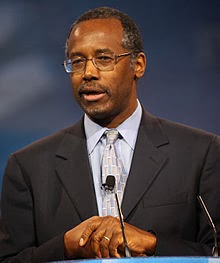 I first heard of Dr. Benjamin Black while listening to him give a speech at the National Prayer Breakfast two years ago.  He spoke about the vast overreach of big government and equated Obamacare to slavery...and he did it not ten feet from the man who the program is named for.  Liberals were up in arms and severely berated Dr. Carson for saying things critical of Barack Obama, something the main stream media just won't do..nor put up with.

Well, I gave sufficient kudos to a man brave enough to speak out on the issues he believes in.  However I was put off by the Republicans and conservative media types just slobbering unmercifully over Dr. Carson's speech.  First, I thought it "tokenism", a brazen effort to employ a Black man to do battle with another Black man.  It was if all the conservative types were trotting out a token Black man to show that they were not racist, that they could embrace the political philosophies of a Black man in order to counter the age old liberal branding of racism in the conservative movement.

No doubt there was some tokenism, at least in some corners of conservative land.  But I was probably not being fair to fair minded conservatives who truly value the worth of a Black man who has lived his life with truth and virtue.  Still, it wasn't enough for me personally to jump on the Carson bandwagon...Barack Obama had poisoned the well for me to ever again consider electing a Black man to the Presidency.  I had seen the innocuous Barack Obama, friend to all America, loving both the red states AND the blue states and, after election, ready to heal the racial wounds of the last sixty years or so.  Then, having to watch Obama, after election, install a liberal mafia in the White House, declare racial and class warfare to divide us, and watch him talk in Ebonics at those NAACP affairs, all the while blaming the great White Honky for the ills of Blacks.

So no way was I ready to buy anything Dr. Carson was offering.   I have written on this blog before that Obama had poisoned the well for any future Black Presidents and I didn't think America would go for another Black in the White House, at least for a century.

And then I began to learn more about Dr. Ben Carson.  I learned that he overcame the challenges of growing up, raised by a single mom, educated in a Detroit high school, overcoming those obstacles and winning a scholarship to Yale University.  I learned that Dr. Carson was the youngest Chief of Surgery at John Hopkins University, that he was considered the most gifted surgeon in his field in the world, that he had penned six books, two about his own incredible life.     I began to read about his politics, the value he places on individual effort, this deep love for America, his willingness to criticize his own race for their sloth and victimhood.  And most of all, I learned that Dr. Carson has led his life in conformance to those principles.

And I guess I like that Dr. Carson has been equally critical of both parties, citing the corruption and dishonesty of our current crop of politicians, all the while offering sound, reasonable and logical solutions to heal our nation's ills.

So, should Dr. Carson find away to work his way through the contrived and superficial pathway to securing the nomination for the Republican party in 2016 I would have no qualms voting for him.  And I suspect he'd get a at least some of the Black vote.  No, not the kool-aid drinking, blind Black followers who covet free cell phones and welfare checks...but certainly a good portion of those Blacks in a Detroit cafe who, following Obama's State of The Union Speech, said of him, "he's not for Blacks...he cares nothing for our 30% unemployment rates."  So Dr. Carson would garner a slab or two of the Black vote; the working class and the professional middle class of Blacks who see Obama as a "pampered Oreo" who has never held a job and hasn't a clue how to create one.

And who knows?  Maybe Dr. Carson will win the Presidency and do so well for all races, and for all economic classes, that he can cleanse the poison for the well that few middle class Whites would drink from.
Posted by A Modest Scribler at 2:00 AM

Dr Carson would be a damn good president.

We can only hope, anyone but Hillary! And I'm not excited about anyone talking about running. Hopefully we get someone worth a shit.

Mike, he would certainly be better than the one we have now. Brian, I choose to forgive Marco Rubio for, in a moment of weakness, joining the pro-illegal immigration crowd. I would love to see two articulate and intelligent people on the Republican ticket come 2016. Perhaps Rubio for President and Dr. Carson for VP...or even vice versa!

That was no moment of weakness for Rubio. It was attempted political expediency. Amnesty will always be on the table for him, should he hit a snag or a logjam.