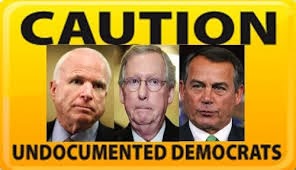 Senator Mitch McConnell, Republican, from Kentucky is facing a tough uphill fight to maintain his Senate seat come November.  He currently trails the Democratic challenger and is being tested in the party's primary by a Tea Party conservative.  This weekend, in a stark illustration of someone "whistling in the dark" McConnell voiced his extreme hate for Tea Party Republicans and Libertarians by saying "we'll crush these Tea Party extremists in every election across this nation".

To which I say "good luck, Mitch".  Hey, I'm not saying that the Tea Party will win every election come November.  The TP may vey well have minimal impact this year.  But for every RINO, like McCain and McConnell, who believe they can just continuing rubber stamping Obama's agenda, I say you're in for a rude awakening.  And for every liberal Democrat who believe the Tea Party is dead, I say "you ain't seen nothing yet.

Why?  Because Obama is driving us into a deeper ditch than that one they accuse Bush of orchestrating.  Just this past week we saw the OMB project a national debt of $25 trillion dollars by the time Obama leaves office.  Get out your calculator folks; even at the Fed's current suppressed interest rates you're going to see over 40 cents of every tax dollar firmly committed to paying just the interest on that kind of massive debt....doesn't leave much for Defense, or Medicare/Medicaid, or Obama's massive welfare expansion, does it?  And when Americans finally begin to ask what happened...and when they get their answer, they are going to be rushing toward a Tea Party that has screamed for smaller government and fiscal responsibility for a decade.

So John and Mitch and John, just keep calling yourselves conservatives, just keep calling the Tea Party a group of terrorists, just keep voting for annual massive tax expenditures for programs fraught with fraud, waste and abuse...your time is coming....and those times will prove ugly.

And that grand Tea Party will prove to be as triumphant as the first one was...yeah, the ones led by Washington and Adams and Franklin and Jefferson.
Posted by A Modest Scribler at 2:00 AM