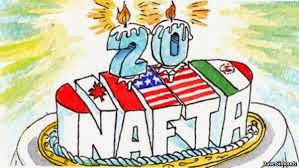 From 1981 to 1989 Ronald Reagan was able to implement programs that created 23 million jobs.  Such companies as Walmart, Cisco Systems, Apple and Intel began to blossom in an environment that encouraged the formation of business capital and the expansion of national commerce. And during that period the economy grew at a faster rate than at any time in our history.  Reagan brought down the inflation rate from 20 percent under Jimmy Carter to less than six percent when he left office.

And four years later Bill Clinton signed the North American Free Trade Agreement and sent 21.6 million jobs to other countries, almost the same amount that Reagan created during his two terms of office.  Of course businesses will trot out any number of business sponsored studies that claim NAFTA created jobs...but the big lie is that most of the new jobs created in the last twenty years were created by Silicon Valley and would have been a huge net plus had we been able to keep those 21.6 million manufacturing jobs at home.

You see NAFTA insured that America would never be able to again reign supreme in global business.  Union salaries, restrictive EPA policies which says it's okay for India and China and Vietnam to use prison labor and process foods under unsafe conditions, American corporations must wade through some 11,000 federal regulations in order to do business.  Mexico can make Coca Cola and breakfast cereal and flour and just filter out the dead rats and insects, and that's okay.  And China can sell us tainted baby formula and tainted dog food that kills babies and dogs and get a slap on the wrist....but not our good old American companies.

Am I advocating that our companies be able to sift out bugs and rats from our food processing?  Of course not.  I just believe foreign companies should have to meet the same labor and health standards that we impose on ourselves.  Our lax trade laws as outlined in NAFTA has put us at a competitive disadvantage that has at least partly been responsible for the loss of tens of millions of American jobs.

A couple of days ago I was reading a breakdown of the various economies in the Americas.  While Canada's economic base was nearly even split between manufacturing and the service sector, the U.S economy is comprised of over 80% in the service sector and a pitiful 20 percent in the manufacturing sector.  And even Adam Smith 300 year ago postulated that a nation without an industrialized base cannot prevail for long.

I have travelled extensively in my lifetime and one of the things that most countries have most in common with each other is the protections they implement to protect their own workers.  Whether it be Japan or China or India or South Korea, or the UK, or Germany, it is damned hard to get a job that a native worker wants to have.  The U.S.  seems to be the lone exception.  In fact, the callous treatment of the American worker is almost criminal.  We import a million foreign workers a year just for high tech.  We have another two million illegal Mexicans who come in each year, establish fake ID and take our construction jobs, manufacturing jobs and most of our service jobs....and they suppress the wages so low that most Americans can't afford to take them-they won't support a family!

So Happy Birthday NAFTA!  Our "real unemployment rate" is over 30 percent as some ten million Americans have given up trying to find a job that will support a family, and we'll import another million or so to take even more this year, and when the Democrats legalize those 30 million illegal Mexicans sometime in the near future we can a all go home and crawl up and die.

Pardon us if we don't celebrate your birthday, NAFTA.  Start the party without us.

Note:  Tomorrow I'll address the other major issue that is costing America her jobs.
Posted by A Modest Scribler at 2:00 AM

I think I'll sit this one out! No celebrating for me. Oh, and be sure to watch out for toxic plastic products from China. I've been warning friends about this for a long time. One friend purchased a vinyl shower curtain liner a week ago & it stunk up her whole house with a toxic smell. I told her to check the packaging & NOT to my amazement, it read: WARNING: This product contains chemicals known to the state of California to cause cancer, birth defects,or other reproductive harm. Made in China.

Me too, Carol! I won't buy any food item or commodity from China....and I'm trying like hell to read where a piece of clothing or other item is made...wish I could buy more American goods but they are getting harder and harder to find.