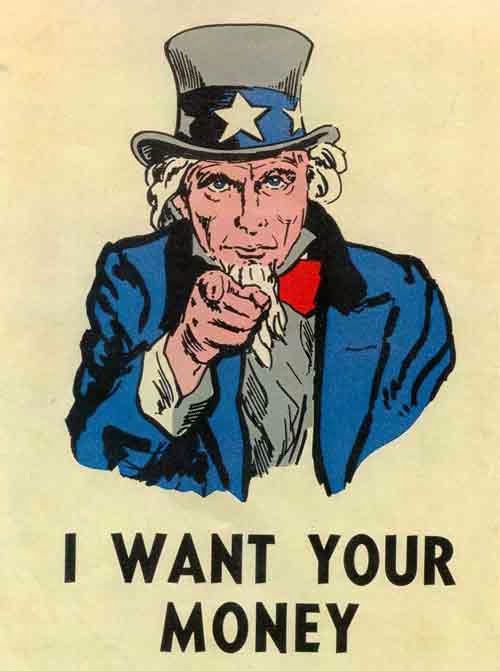 Remember when Barack Obama got his big tax increase on the rich last January?  Well guess what; he wants more.  This week Robin Hood Obama wants another $100 billion dollars by closing "corporate tax loopholes".  And what does Obama want to do with that extra $100 billion?  Yep, he wants to reward his voting block, those 30 million tit-suckers who already enjoy their welfare check, their food stamps, their free Section 8 $2500 dollars a month housing allowance, their generous earned income tax credit, their $2400 dollars per brat child tax credit, their free all day kindergarten, their free child care...and last but not least, their free cell phone.

And handing out that money won't do a damned thing for the economy...but it'll buy Democrats some more votes.

Here's a few facts for you to chew on.  The United States has the highest corporate tax of all industrialized nations at 35%.  After companies have forked that over to Uncle Sam, they then shell out a huge chunk to the state.  New York, New Jersey, California, Vermont and Rhode Island will grab as much of 7%, with the other states taking in slightly less.  Let's not get into the city and county taxes because it's all so confusing but I think you get the picture.  Suffice it to say that, before a dime is paid out to corporate shareholders, fully half will be paid out in corporate taxes.  (And it's almost laughably sad that, after all those corporate taxes are paid, Uncle Sugar taxes you on any dividends that corporation sends to you as a shareholder of their stock)...so they get even more of the loot.

Now Obama has been very good at demonizing "the fat cats"...so much so that wide swaths of "know-nothings" are all too willing to trot out the "fab 14", the G.E.'s and Verizons of the corporate world who paid no taxes for a couple of years.  In order for me to explain that I'd have to explain corporate report, investment tax credits, equipment tax credits, capital loss carryovers, etc..and I know you don't want me to get into all that.

What I am saying is that American companies find any number of reasons to leave the U.S.; high union labor rates, restrictive EPA regulations, OSHA regs that one needs an interpreter to fathom and a general environment not friendly to business, something Obama is champ at creating.  And now he wants to tax them right out of the country.

So, corporations are leaving in droves...and with it, your jobs.  And Obama's latest cash grab will only hurt the economy and cost those still willing to work, their job.  The only winners under Obama are those that suck at the public tit and vote Democrat.

Post Script:  Since this was written we've learned that Obama is not asking for $100 billion, he's asking for one trillion more!...he spreads it out over ten years.  Also saw an CBO report that said Obama will have run the national debt to $25 trillion by the time he leaves office.
Posted by A Modest Scribler at 2:00 AM

Such a thought provoking piece on the day we start overtime,starting an hour earlier means getting up a half hour earlier trading sleep for quality time to read and comment.Can I get back to this later? Jotted this down last night. Have a positive day.

Craig, we're lucky here in Arizona; we don't do daylight savings changes so we're pretty much on an even keel.

Have yourself an extra cup of joe today and you'll be fine. :)

Unfortunately the tit suckers don't know anything about the deficit nor do they care. I wish we had a Congress with balls to tel oturdo to take a flying F through a rolling donut. We need a Congress to stand up to this nitwit. It doesn't look like it's going to any better. Jeez!

Oh daylight savings, only the government could think that one could cut a foot off the bottom of a blanket sew it on the top and have a longer blanket.