Presidential Visits and 40,000 Gallons of Gas 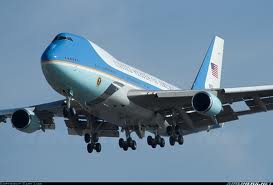 I just read a Wiki answer from an aerospace engineer about how many gallons of gas Air Force One uses up during one of those Presidential visits, both political and official.  Turns out the President uses up an average of 15,000 gallons of gas on a one-way flight.  Let's be kind and say it's about 30,000 gallons of gas for a round trip flight.

But it doesn't stop there!  Anyone been in a 20 mile radius of an airport where a President is landing?  If you have you'll know that you'll be stuck in traffic for hours sometimes as the President lands, disembarks, is shuttled into a limo, then taken to his destination.  During that hour or two, ten thousand cars are sitting there in neutral, burning tens of thousands of gas!  Let's not even get into the pollution that's being spewed into the skies.

What's my point?  It is essentially this:  perhaps in an age of ever increasing concerns about gas prices and the environment, it is time for the President to hold more electronic town halls and speeches and reduce that huge carbon footprint!

Of course, this would save far more.  We wouldn't need to pay the expense of that huge secret service detail nor would we need to pay for rentals of limos and all the support staff needed to coordinate these activities.

Do I have any hope that this will ever happen?  None.  Politicians of any party are egotists.  They are addicted to the touchy-feely adoration that comes with these visits.  By their very nature politicians must have constant "ego feedings" that are simply not satisfied by looking and speaking into a camera.

Maybe if we could clear out the First Class section of a commercial flight for his exclusive use , give the Prez free rein on the plane's intercom and promise him a "captive audience" of 500 or so travelers in the cheap seats we could sell it to the next President!