How Can I Screw Rachel The Way She Screws Me? 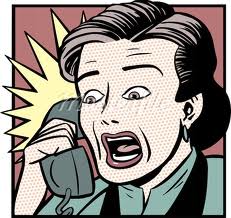 Is there anyone in America who has not received a call from "Rachel" with Cardmember Services at least twice a week?  "Rachel" is that robo-caller that is always calling to tell me there's nothing wrong with my card account but blah, blah, blah.

"Rachel" is like a member of the family now.  Just as I'm settling into a nice afternoon nap "Rachel" calls me.  Sometimes I'm in the middle of dinner when Rachel calls.  She's even called me and woke me up at night.

I've reported "Rachel" to the FTC at least a dozen times.  They can do nothing about "Rachel"; she's been calling me for a decade but the FTC says "Rachel" moves around a lot and they can't seem to nail her down and catch her.

I guess the frustrating thing about "Rachel" is that she's just an electronic recording.  If it were a live person I could at least turn her call into an obscene phone call.  I would really like to screw "Rachel" the way she has screwed me for a decade.

I guess our only hope is this:  Everyone in America, having listened to her at least twice a week for ten years, now knows her voice.  Perhaps someday some keenly attuned Walmart shopper will encounter "Rachel" in the lingerie aisle and do to her what she's been doing to us for so very long.  Like taking one of those huge 80's cell phones and giving her a proctology exam.  What would the criminal charges for that one be?...."aural sex?"

The 20th century had Mussolini, Stalin and Hitler.  The 21st century has "Rachel".

Posted by A Modest Scribler at 2:30 AM