A Litany of Really Dumb Statements 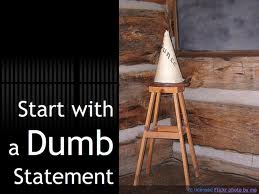 Today's blog is about statements people have made that I consider really dumb.  I don't mean it to be politically oriented but many have come from politicians from all political persuasions.  What got me thinking about this subject was watching various interviews with the Occupy Wall Street crowd.  These people were demanding jobs, free houses, free health care and even forgiveness of their student loan debt.  Each time the interviewer asked them who they wanted to pay for it, they chirped "the government".  When they were reminded that "the government" was the taxpayer they seemed truly dumbfounded.
Enough said.  Here's some other really dumb statements I've heard over my lifetime:

"We're The Government and We're Here to Help You".    Please tell me of any government office, whether city, state or federal, that wasn't occupied by government bureaucrats that didn't act like they were doing you a huge favor just for even listening to you.  Please provide proof that one government program is not rife with fraud, waste and abuse.

"For erections lasting more than four hours please consult your physician"  Are you kidding me?  Any man old enough to need Viagra is not going to be running to his doctor complaining about a four hour erection!  He's more likely to be "streaking" down main street and snapping photos!

"We gave 2,000 automatic weapons to the Mexican drug cartels because we were trying to curb the exploding drug violence on our border".  This was Obama's Attorney General, Eric Holder's testimony to Congress during the investigation on why our Border Patrol was being gunned down with those same weapons!

"But obviously, we've got to stand by our North Korean allies"  Sarah Palin's response when asked how she would handle the Korea problem.

"UPS and FEDEX are doing just fine, right?  It's the Post Office that's always having problems"...Barack Obama attempting to make the case for government run healthcare, while simultaneously undercutting his own argument.  (August 11, 2009 in Portsmouth, New Hampshire)


"I've now been to 57 states"...Barack Obama during the 2008 campaign.  http://politicalhumor.about.com/od/barackobamavideos/youtube/obama-57-states.htm

"I'm not worried about poor people".  Mitt Romney during the 2012 Republican campaign.

"We've got to pass it before you can read it..and see what's in it".....Nancy Pelosi to the Press Corp just before passage of the 2,300 page Obamacare bill.

"We found ourselves in a hole that I didn't' dig, but I have dug, dug and dug to try and get out of that hole".   Democratic Senate Leader Harry Reid on the economy.


"Half the lies they tell me aren't true"...Yogi Berra


"Always go to other people's funeral, otherwise they won't go to yours"...Yogi Berra


"Baseball is 90 percent mental; the other half is physical"....Yogi Berra


Re Race and Class Warfare:  "I want to be President of all the people"...."We must learn to disagree with civility"....There are no Red States or Blue States"....
...Barack Obama

One I really hate is I'm just doing my job" usually used when a distateful action is taking place. Really indicates modern inability for taking responsilbility for one's actions.

That one bothers me a great deal too!