"Commuting the Death Sentence of A House Fly" 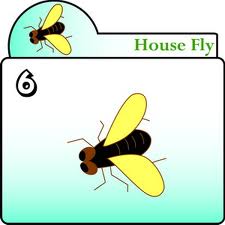 I've had one house fly in my house since yesterday.  I know it's just the one because I've searched the entire house in hot pursuit of him.  He only shows up once I've put down the deadly fly swatter.  When I do, he begins flitting around my head, trekking across my bald pate, then scooting away when I painfully whomp the top of my head with the swatter.  I imagine he's getting a real kick out of it.

My fly also loves coffee; as soon as I fill my mug with coffee and set it down on my computer desk, Mr. Fly begins trying to find a landing pattern on the rim of the mug.  I wave him off, only to be confounded by his next attempt.

Mr. Fly also loves my computer screen.  Even as I type this he is hovering about the word "screen"..there, I brush him away and he's off again.  He is particularly daring now that I have declared a truce; I've tried to send some good vibes his way, promising not to use the fly swatter on him if he'll just give me a moment or two of respite.

A few hours ago I went into the bedroom to take a nap.  I was in blissful dreamland when I began to emerge from REM sleep, brought on by an irritating buzz and Mr. Fly trying to do a three point landing on my eyelid.  I awoke in a crabby mood which became even more crabby when I looked at the clock and realized my nap was limited to 15 minutes.  "Damn", I cursed "he even follows me to the frickin bedroom!"

I then began to feel a little sorry for Mr. Fly.  Perhaps he's just lonely, stuck in the house and unable to go outside and play in dog excrement in the back yard.  Then, I remembered reading somewhere that the common house fly only lives for 48 hours or so...then I really felt bad, knowing he's wasted his youth and much of his adulthood trying desperately to find a nice pile of garbage to party in.  Because I take all my garbage out every morning he's been out of luck with that.

My empathy and sympathy for Mr. Fly has now gotten the better of me.  Why should I have the power of life or death for this little irritating imp?  I've decided to be magnanimous and let the little bastard die of old age.  If my calculations are correct he's going to be going belly up sometime tonight, right around my bed time.

This "fly goodwill" is not applicable to my youngest Chihuahua; little Rosie hates flies and often camps out near my back sliding door.  This big window catches the heat of the sun and any flies within the house will inevitably land on the glass to warm up.  Rosie then goes into a tizzy and begins pawing the glass and leaping up to try to snare one with her paw.  Sometimes she succeeds in knocking on to the floor, then while they are dazed she begins taunting them, pawing at the fly each time it tries to recover equilibrium and fly off.  Sometimes she bares her teeth in silent snarl in an effort to scare them to death.  Failing this, the fly often plays dead, then when Rosie walks away, bored with the play, the fly leaps up and flies away.

But Rosie's not here today; her mom has custody of her for a few days, so Mr. Fly is safe.  So, humanitarian that I am, I am content to maintain a death watch for Mr. Fly, all the while brushing him off my head and off my coffee mug.