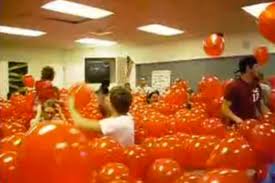 Well, the airwaves are full of reports about Mitt Romney's "bullying" a kid at his boy's school.  Seems the kid got his hair bleached and got an unwanted hair cut.  Years later the same kid feeds Obama's Political Hit Squad that Mitt Romney abused him...and that he's gay.

Obama's death squad twisted this into a story about how Romney abused gays while in high school.  Never mind that the guy readily admits that he either was not gay, or had not identified himself as gay back then...this was just too good a lie for Obama not to push.  Coming on the heels of The Annointed One laying his blessing on gay marriage, Obama's hit men saw the opportunity to once again find another segment of society to divide.

Romney responded by apologizing for what he did 50 years ago but of course this is never enough for the liberals.  Unless you fall on your sword you can never redeem yourself.

I hate bullying.   During my high school days we were no where close to the level of bullying that exist in our youth culture today.  But, as high school boys, we did indeed participate in our share of school pranks.  This was equal opportunity pranking.  No one was exempt from being the brunt of a prank and I can't recall ever picking on anyone based on their gender or race or personality.

But we all gave and received our share of high school pranks.  I can remember we let the air out of a tire on a guy's car (and then provided a pump for him to pump back up!).  We snapped towels on rear-ends in the locker room.  All of us at one time or another got red-hot (TigerBalm) rubbed into the crotch of our jock straps before going out for P.E.

Had we known that someday we might want to run for President we certainly would have refrained from theses high-jinks, especially today where every mistake you ever made is brought forth in High Definition Technicolor by your political adversaries.

So now we have CNN and MSNBC running "Breaking News" bulletins about Romney's high school behavior.  And you know what?  In the many hours of this coverage, not once have I heard one of those left wing TV pundits mention Obama's abuse of alcohol, pot and cocaine in his good ole high school and college days.  Not a single mention!

The next time I read a blog, I hope that it doesnt disappoint me as much as this one. I mean, I know it was my choice to read, but I actually thought youd have something interesting to say. All I hear is a bunch of whining about something that you could fix if you werent too busy looking for attention.