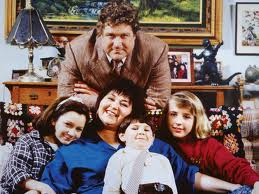 Anyone who's ever read my blog for any length of time know that I do not believe in the conventional concept of Hell.  No eternal fire; God is simply not that cruel.  However, I'm more than willing to admit that God probably has some moment of reckoning waiting for those of us who have not walked the straight and narrow.

Perhaps, God, knowing each of us so well, has something unique for each of us when we finally meet Him.  Perhaps, as punishment for our mis-deeds, God has "custom-made mini-Hells" all ready for "the big payback."

For me, Hell would be watching endless re-runs of "Roseanne".  I just have never been too crazy about watching hours upon hours of the travails of white trailer trash.  Two extremely obese adults, leading their stomachs around the house, yelling at each other just doesn't make it with me.  I can only guess that people who watched that show also love "Maury" and "Jerry Springer".  Yes, indeed, God could sure put the hurts on me by forcing me to watch "Roseanne".

If God is really cruel he would also force me to watch re-runs of "Gilligan's Island", "Fantasy Island", any reality show and any of those Norman Lear Black comedies from the 80's.  I do not believe black folks yell at each other constantly nor do most black people speak in "Ebonics".  I also resented those TV Blacks who chose to get their revenge for all those servile "Stephen Fetchit" Blacks in 40's movies by always having a white "stooge" to play the fool in those 80's shows.

Perhaps the worst hell for me, (and I'm almost afraid to let the Big Guy know this), would be having to watch Rachel Maddow and the rest of those flaming liberals on MSNBC.  Just the idea of having to watch those folks keeps me awake at night...and praying for a little more time here in a world where I can still "choose my channel".

Posted by A Modest Scribler at 6:22 AM

In honor of "Al Radka", John, thanks.