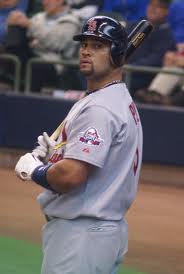 Albert Pujols left St. Louis for a spanking new contract with the Los Angeles Angels of Anaheim.  They are paying him $24 million dollars a year for the next ten years.  That is guaranteed money!  It doesn't matter how he performs; he's going to make in excess of $240 million dollars over the next decade.

Albert Pujols has hit one home run this year and he's batting below the "Mendosa Line", with a sub 200 batting average.

Last year the Washington Nationals paid Jason Werth almost 20 million a year.  He had a really bad year. This morning brings news that Jason Werth has a broken wrist and will be out for months, perhaps longer.   If and when he does come back there is no guarantee that Werth will ever hit for power and average as he did in Philly.

A few years ago the San Francisco Giants signed Barry Zito to a long term contract that pays him $124 million dollars.  He's been a bust ever since he signed that contract and his 80 mile an hour fast ball is one of the slowest in the league.  I can count on my fingers the number of pitching victories Zito has posted since that huge contract signing.

Carl Crawford signed last year with the Boston Red Sox.  The Sox gave him $124 million dollars over seven years.  Crawford was hurt most of the year and batted an anemic low 200's batting average.  His Home Run total tanked as well.  This year Crawford is again injured, hasn't' played a single game, and his injuries are now a matter of great concern to the ball club.

I could cite another hundred or so examples of ball clubs paying enormous salaries with little in return for their money!  Baseball executives surely come from another planet!  How is it possible in this day and age, when our country continues to slog through a deep recession, that ball clubs can afford to give these kind of salaries and get nothing in return?

The answer is:  You, the fan, are paying for these mistakes.  Once upon a time we cold go to a major league ball park, have a hot dog and a beer, and fork out less than ten bucks!  You won't find that bargain today.  And keep in mind, we weren't seeing an inferior product for that ten bucks.  We were seeing the likes of Mickey Mantle and Willie Mays and Willie McCovey and Reggie Jackson!  It's also interesting to note that only three players in those days were paid as much as $100,000 dollars; Mantle, Mays and DiMaggio.  In the mid-60's the great Sandy Koufax and Don Drysdale held out for salaries of $80,000 and $50,000 respectively!

Amazingly, while we fans are being gouged at the ballpark, the major league club owners continue to thrive!  Broadcast revenue and sky high ticket prices continue to line their pockets with billions of dollars  while our cable bills and tickets increase.  And note this:  as baseball continues to hide their books, as they plead poverty, there has never been a baseball club sold for less than the price they paid for it in the beginning!

I believe if baseball continues to ignore the welfare of the fans they are going to go right down the tubes.  As baseball executives continue to pay these ridiculous salaries...and pass the costs of their mistakes down to the fan, baseball will eventually suffer.

"I believe if baseball continues to ignore the welfare of the fans they are going to go right down the tubes. As baseball executives continue to pay these ridiculous salaries...and pass the costs of their mistakes down to the fan, baseball will eventually suffer."

I have been waiting for that day for many years but alas people keep voting for democrats and going to ball games. I don't see an end to the bad behavior.
My brother came to town wanting to see a Giants game while here, we paid $78 a seat to a sellout game to sit in the knotholes. A family day at the game starts pushing a $1000! Ridiculous!
My Uncle Lou played pro ball in the late '50s with some of the names you mentioned, he told me his salary started at $600 a month.
I thought of something that would put a smile back on my face would be to fine the players making errors or pitching bad games, a fee of draconian proportions, like $150,000 for dropped balls, Zito would get $200,000 a walk, etc.. That would make the wages a little more tolerable to me and might help reduce ticket prices.

Couldn't have said it better myself, Ken. Fines for bad play would be great but the player's union is now so strong that could never happen.
Funny how the pendulum always swings too severely; back before the reserve clause reforms the owners were tyrants and players were mistreated. Now salaries, and the punishment for bad behavior are way out of whack. Don't know when it will get resolved but someday it will...baseball is madness now.

This article is very poorly written, velocity matters not as we see Jamie Moyer still pitching at age 49. Zito is simply ineffective, and if the Giants just observed how he pitched in his final Oakland years they wouldn't be paying the price to this day.

The article could have been written entirely on the Boston Red Sox: Carl Crawford, John Lackey, Daisuke Matsuzaka, and Josh Beckett are all fat and happy. Why should they give a s&*% if they play effectively again if they get the money regardless?

The players union will never allow for a strict salary cap or NFL-type contracts that are more performance/bonus driven.

Also, you neglected to mention that if Pujols reaches 3,000 hits and breaks the HR record he's in line for an additional $10 million.

Thanks for your critique of my blog. Could you please provide me with a link to your blog so I can see how it's supposed to be written?
Thanks again.