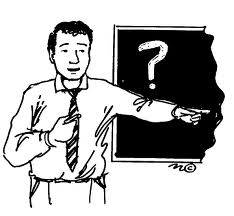 I was an average high school student.  I did best in English and History.  Were I not "equation-challenged" in Math I would probably have been a "B" student.  I just could not grasp the concept that knowing the dimensions of an isosceles triangle would make my life easier nor did I see how theorems advanced the road of humanity.

I took four years of French, and to this day, can still understand French and can read a French newspaper.  I have no idea how this knowledge stayed with me for nearly half a century but I'm grateful for it.  In typing class I also developed a 50 words per minute typing skill that has served me well in both my personal and professional life.

Most of the rest of my high school life was spent over in the music room, learning breath control and developing a relationship between voice, lyric and melody and practicing and performing in plays, operettas and music festivals.

While I thought music and drama would be my life, the Big Fella was arranging "back up plans".  HE was planting a seed that would not fully develop until a few years later.  That "seed" came in the form of a balding, gap-toothed history teacher who always had pants covered in chalk and who was "no-nonsense" when it came to learning in his class.  His name was Gerald Hodges and he was my sophomore history teacher.

I have often read that, if a teacher is truly in love with his subject, it is quite impossible for one to sit in his class and not learn.  Mr. Hodges was like this.  He loved history and, for me at least, he succeeded in making me like it too.  Even then historical characters were beginning to leap off the page in full dimension and become "real" to me.  Mr. Hodges taught me that History was more than arbitrary dates and the exploits of ancient dead men.

George Washington was more than a frumpy white-haired gent with bad teeth.  When Mr. Hodges talked about him old George came galloping through the years, the smell of leather saddle distinct, the clop of horse hooves and labored breathing of his steed both exciting and real as he chased Cornwallis across an ancient field.

When Mr. Hodges spoke of Thomas Jefferson he quoted our then President John Kennedy who said to a group of Nobel Laureates gathered at a White House dinner; "Gentlemen, I don't believe I've witnessed a more impressive array of scholars gathered in one place...with the possible exception of when Thomas Jefferson dined alone".  That, to me, was a pretty impressive introduction of our third President.

Mr. Hodges taught us the U.S. Constitution.  He impressed upon us the importance of those first ten amendments, the Bill of Rights.  He gave examples in real terms of why those Rights were so very important and he challenged us to become good citizens and defend those rights, for everyone, be they rich or poor, weak or strong.

So, thanks to Mr. Hodges, I was smitten with History, but I was not yet in love with it.  That would not come for a few years.  The seed blossomed into growth one dark night in Vietnam.  I was in a group military formation awaiting my first night on security duty.  As we received our duty instructions the Flight Commander's words were halted by the screaming whine of North Vietnamese 122 rockets soaring over our heads and exploding in thundering crashes about us.  Like everyone else, I took cover, and, illogically, burying my arms beneath my body, as if I could preserve my arms everything would be okay.

The reality of war had finally come home to me.  All that night I thought about the guys on the other end of those rocket launches.  I wondered what would make them think they had any chance against the most powerful superpower in the world!  All of a sudden I wanted to know, that if I were to die in this place, what was I dying for and what were "they" fighting for.

The next day I went to the Tan Son Nhut base library.  I searched out the shelves on Vietnam history.  I started by reading of all the foreign powers who had tried to permanently colonize this small nation.  I read of the Portugese efforts, the French colonization, of the horrors the Vietnamese suffered at the hands of the Japanese and, finally, how America got settled in the quagmire of Vietnam.  I read every book on that shelf, then sought out the histories of men and events from other nations.

Those pursuits led to examinations of varied philosophies, religions, and the world's literature and the history of how each evolved.  I was blessed that I was later able to pursue those interests in the formal realm of college classroom, and degreed acceptance.  I am blessed still, that when I open a history book the characters leap up off the page and speak to me as if they were old friends.

And I owe it all to Mr. Hodges.  For caring enough about his subject that it would rub off on others.  For planting the small seed that would develop into a lovely thing indeed.

Rest in Peace, Mr. Hodges...may there be thousands more like you, spreading the word like a Johnny Appleseed...planting the seeds that will blossom and grow and make the world a more enlightened place to live.

Good story. Sadly I don't remember much about any high school teachers except maybe the ancient lady who taught Greg Shorthand. Can't remember her name but learning shorthand helped me dramatically when I went to college late in life. I was 38 when I started going to college. Only thing is, taking notes in shorthand makes you take down too much information.

In 7th grade, I adored my music teacher. Mr. TenHarkel was also the school choir instructor. He taught us Silent Night in the language in which it was written, German, and I still remember it.

Hi PammieJean! I was fortunate that I had a handful of wonderful teachers, in various grades, who had a positive impact on my development.

I just hope there are thousands of teachers who still inspire students to greater achievement!