"My Neighbor And The Long Goodbye" 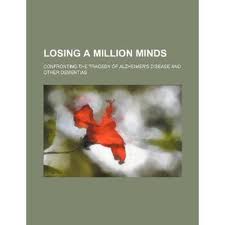 I moved into my present home eight summers ago.  The first neighbor who came over to say "hi" was my neighbor Richard.  He was a very friendly guy, had a sunny and gentle disposition...made me glad I had a kind neighbor.   He looked much younger than his age.  I would not have guessed that he was in his mid-70's as he had such a youthful outlook on life.

During the first weeks I spent a lot of time out in the yard, digging weeds and planting bushes and trees.  Richard also spent time outdoors, fussing with some outdoor chore.  As we worked we began the routine of running conversations as we carried out our chores.  During those exchanges I learned that Dick was a retired teacher.  I reflected that he would be one of those teachers that I would have been glad to have.  Dick was also good with his hands.  I would often see him working with wood in his open garage.  He seemed to know what he was doing.

About a year after I moved in Dick came over one morning while I was working in the garage.  We engaged in swapping life experiences.   At one point Dick was talking about a farm he once lived on when suddenly he paused and was silent.  He then said to me "I'm so sorry, I've learned that I'm in the early stages of Alzheimer's and I get a little fuzzy once in a while".  I felt no discomfort in this revelation, although I did feel sorry for him.  I gently prodded him about what he was saying before his thoughts went foggy and he finished his story with ease.

A few months later Dick related to me that he was preparing to sell his RV.  He had already prepared a sales flyer and when I saw it I was taken aback by his posting of an unusually low sale price.  I told him that didn't sound right to me and we came inside to my den and I checked out the price range of his RV and showed it to him.  I like to think I saved him about ten thousand dollars on the sale.  This was my first indication that Dick would probably need more assistance than occasional prodding on telling a story.

The next problem that arose was Dick taking off for morning walks, then being unable to find his way back home.  Sometimes his wife would have to take out after him and bring him home.  Finally, she put an end to his walks entirely.

Not long after that Dick could be seen puttering around the yard but it was clear by then that he was well along the highway of "The Long Goodbye".  This saddened me beyond measure.  Here was a highly educated man, with a bright and sunny personality who suffers the tragedy of a brilliant mind that had now forsaken him.  I cannot imagine a situation so unfair to both him as well as his loving wife.

About three years ago Dick's son moved in with his parents as both began suffering from the devastation of Alzheimer's.  Though the son works during the day he returns each night to give succor and support to those who once cared as lovingly for him.  I was glad that they were blessed with help

Three days ago Dick passed, his body finally giving way long after his mind had left him.  Last night I read his obituary and guestbook.  The guestbook was signed by Dick's students.  They spoke of a caring and loving teacher, and a man who had made a difference in their lives.   Perhaps now Dick can once again see and hear of the love expressed for him; something he had missed sorely in his last years...the years of the long goodbye.
Posted by A Modest Scribler at 3:00 AM

My wife is dying from cerebral atrophy. Many confuse it with alzheimer's. It is not the same.

Cerebral atrophy is the result of trauma to the brain. In my wife's case, the trauma was caused by the chemo-therapy used to fight the cancerous tumors in her skull (not her brain).

Death from cerebral atrophy is slow and painless. Yes, there is a loss of short-term memory, but more prevalent, in my wife's case, is the slow loss of thirst and hunger.

There is no therapy, and no cure. Death can occur within months, or take years.

I am so sorry for you and your wife. I can only pray that our creator gives you the strength to bear this burden.

This is so sad yet it occurring all around us. During my years of law enforcement I ran into many cases of Dementia. So at the beginning stages where they repeat themselves over and over and some more severe cases where they would get lost when they walked or others that had to wera diapers. It was so sad when we would find someone out for a walk and couldn't remember how to get home or tell you where they lived. I loved your story because I can

Yes, John. And no one knows why it strikes on family member and leaves another alone. They are working on this with research but, to date, have only had minimal success with dealing with the symptoms and not the prevention. Sad indeed.

Hey, found your link from Craigslist and I just wanted to say that what you wrote about your neighbor/friend was beautiful. Alzheimer's is such a cruel disease, and it was lovely of you to support him and his family in the ways that you could.

Thank you for the kind words, Tracy.