"The Great Depression and The Grapes of Wrath" 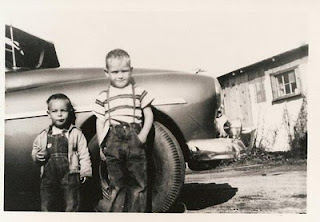 When I watch "The Grapes of Wrath" I see my own Okie family migrating to California and struggling to survive.  We followed in the footsteps of the Joad family.  As soon as we arrived in the great San Joaquin Valley we were assigned an old cabin and a cotton sack and we picked cotton in the summer heat.  We also picked grapes and peaches and strawberries and worked all up and down that valley.

It took my parents years to find "inside work" and, hard though it was, it was far better than working the fields.  I never stopped working the fields until I graduated from high school and joined the military.  I worked in the fields all summer to pay for my school clothes and expenses.  We didn't have any fancy welfare programs to rely on but we had one advantage; self pride in earning our keep.

In both a society, and in a personal life, a delicate balance is required to achieve satisfaction and happiness.  When that balance is not achieved both a life and a society becomes sickened.  No where is this more evident today than in the realm of the distribution of prosperity.  The imbalances exist today as a result of the birth of a "victim" class of Americans who believe it is no longer necessary to work for a living.   The imbalance is further compounded by government having reached the limits of capability to support these new generations of "victims".  Working Americans are now feeling the very visible affects of the costs of supporting those who refuse to work and the "productive" are angered by the fraud, waste and abuse that social programs ferment.

The pendulum of social concern can swing both ways, as was the case during the Great Depression, when the monied class not only escaped the pain of financial depression, but were hostile toward the suffering class.  We see some of that today with the Wall Street Titans who have actually prospered during the current suffering but the arrogance of the few is overplayed by liberals today, as half of our entire national budget goes to social programs.

If I were living in the 1930's, when America had "real victims" I'm sure I would be a socialist.  There were "real victims" then where folks were begging to work and no work was available.   I recently watched a documentary on PBS about the dust bowl tragedy in Oklahoma.  FDR offered relief money to farmers and most wouldn't take it; they said they had too much pride to take what they didn't earn.....how things have changed today as our millions in the "victim class" will take anything they can get...and demand even more.

Contrast the Okies migrating to California during the dust bowl years to find work with so many "takers" today..  Those Okies worked for .50 cents a day and earned just enough for one solid daily meal.  Today we have food banks, food stamps, welfare, IRS welfare through child tax credits and hefty personal exemptions, medicaid and all manner of social giveaways.  Millions of folks today have no pride and have become comfortable with taking all they can get.
As the economy improved those Okies got jobs and clawed themselves up to the middle class, contributing to America's productivity and to our strength. Today we have three generations of folks who have been on welfare all of their lives and it doesn't bother them a bit.  So I'm just a bit skeptical about the cries and moans from  some folks on the dole these days.  They don't know what "poor" is.

It is so ironic that one of today's liberals most staunch historical icons said to an Indianopolis official in 1968, "I hate giving welfare checks to the poor, it is as if we are saying take a check, there's no place for you in our society".  That liberal icon was none other than Robert F. Kennedy.  How right he was;  anyone who made that kind of statement today would be called a Tea Partier.  Shows you how far along toward socialism we have come in the forty years since the most progressive leader of the time made that statement.

Let's reform these programs so that only the truly needy are given assistance and let's tell the generational sponges to get out and earn their keep.  It's good for them and damn sure good for all of us.
Posted by A Modest Scribler at 1:55 AM

Wow how true you are!Going to post this anywhere I can..I live in Phoenix.Last I heard here is the no refund policy to fraud for a lot of illgals,false SS numbers and a lot more fraud going on.Try to enforce any Fed or State on immigration and nothing but race cards are screams of vote Obama to save us..Thanks for speaking the truth!! Joe in AZ..

Where is John Gault?

Hi Bob. John Gault passed away when Johnson enacted The Great Society programs; no incentive to work and you improve your tax posture when you can leach from the government.