There seems to be about three breeds of Republicans in Congress these days.  One group of the "good ole boys" who have been in Congress for decades seems to think that the Tea Party conservative movement will eventually pass and they can go back to their "Scotch and Water" Tete a Tetes in the back rooms.  They reckon that when the Tea Party is over they can go back to cutting deals with liberals and damn the spending concerns!  "Say Nancy, if you'll support my earmark I'll support yours".  To which Nancy and Harry respond "Sounds good!  And how about you co-sponsor another amnesty bill!"....and let's get that Dream Act going, huh?"

The second breed of Republicans are a little more concerned; they want to go back to a more agreeable environment in Congress where deal-making was done but they're just a bit worried that maybe the taxpayer has had enough of a two-decade spending orgy, out of control deficits and want to see some fiscal responsibility.  Speaker of the House John Boehner, having been around for a couple of decades, is probably the leader of this group.  "Damned",  he says "if I could only rope those new Tea Party congressmen and herd em back in line!".
The third group are indeed those new Tea Party congressmen who, having hung out with the American people last summer, are bound and determined to keep their promises to break the stranglehold government has on us.  They are still too new to be corrupted and want to see the changes the American people voted them in to achieve.  Although there are only 82 of them but they are raising some hell with the other 350 liberals and moderates that make up the House.
Witness the groups as they went about trying to come up with a 2011 budget, work that the Democratic controlled Congress was supposed to have completed last October (but didn't want the voter to see the size of deficit spending for this coming year!).  They all knew that the current Obama/Reid/Pelosi budget was $3.75 trillion dollars, with $1.75 trillion borrowed from China!  Well, the first breed of Repubs said "let's roll up our sleeves, cut a deal with the Dems and cut $8 billion."  (The Dems said no way, it'll gut our programs)
The second breed of Repubs said "well, I don't know, maybe we could cut $30 billion and really show our good intentions!"  However the TP congressmen said "wait a minute!..."are you people serious?...we've got a $3.75 trillion dollar budget and you want to cut less than 1 percent?"  "Can't you at least cut $60 billion?"
The first and second breeds of Repubs said "wow!, that's pretty drastic!".  The Dems cried "the sky is falling if you cut the budget by a whole 2 percent!"
So now folks:  while you out there who have had to cut back on everything in your life, you who have lost your jobs and your home and your car and have told little Johnny that he's got to pay for his own college education, Congress opts for a government shutdown!    "Cut 2 percent they say?..."why I'd rather shut down the government!".
So what we have is a conundrum; who are the real conservatives?  Frankly, at this time we don't know.  Will the first two breeds finally get it that we are serious about taming the spending or will we back off the pressure on them and the fraud and waste and corruption resumes and they get back to business as usual?
What can we conclude from all of this?  Well we know that most Dems have never met a government program they didn't like.  That leaves us with the bigger question of "who's watching our backs" on the other side?  We just don't know.
Personally, I would like to see America breed a whole new bunch of conservatives who abhor those "scotch and water" parlays in the back rooms of Congress.  Perhaps a nice "Tea" party is more in order. 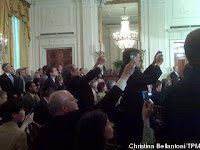 Posted by A Modest Scribler at 1:44 AM

Boehner? He's in group one, lol

go back to ur drugs