In my previous blogs I've documented the explosive costs associated with educating, medicating and incarcerating illegals.  I've exposed the fraudulent W7-INIT tax filings which provide illegals with whopping Earned Income Credits and Child Tax Credits and Food Stamps and WIC and all manner of state and federal handouts.  The following report was provided to me via a friend who's wife teaches in the L.A. school district.  I'll let her report speak for itself:

"As you listen to the news about the student protests over illegal immigration, there are some things that you should be aware of: I am in charge of the English-as-a-second-language department at a large southern California high school which is designated a Title 1 school, meaning that its students average lower socioeconomic and income levels
>
> Most of the schools you are hearing about, South Gate High, Bell Gardens, Huntington Park , etc.. where these students are protesting, are also Title 1 schools.
>
> Title 1 schools are on the free breakfast and free lunch program. When I say free breakfast, I'm not talking a glass of milk and roll -- but a full breakfast and cereal bar with fruits and juices that would make a Marriott proud. The waste of this food is monumental, with trays and trays of it being dumped in the trash uneaten.
> (OUR TAX DOLLARS AT WORK)
>
> I estimate that well over 50% of these students are obese or at least moderately overweight. About 75% or more DO have cell phones. The school also provides day care centers for the unwed teenage pregnant girls(some as young as 13) so they can attend class without the inconvenience of having to arrange for babysitters or having family watch their kids.
> (OUR TAX DOLLARS AT WORK)
>
> I was ordered to spend $700,000 on my department or risk losing funding for the upcoming year even though there was little need for anything; my budget was already substantial. I ended up buying new computers for the computer learning center, half of which, one month later, have been carved with graffiti by the appreciative students who obviously feel humbled and grateful to have a free education in America ..
> (OUR TAX DOLLARS AT WORK)
>
> I have had to intervene several times for young and substitute teachers whose classes consist of many illegal immigrant students here in the country less than 3 months who raised so much hell with the female teachers, calling them "Putas" (whores ) and throwing things, that the teachers were in tears.
>
> Free medical, free education, free food, day care, etc, etc, etc. Is it any wonder they feel entitled not only to be in this country but to demand rights, privileges and entitlements?
>
> To those who want to point out how much these illegal immigrants contribute to our society because they LIKE their gardener and housekeeper and they like to pay less for tomatoes: spend some time in the real world of illegal immigration and see the TRUE costs.
>
> Higher insurance, medical facilities closing, higher medical costs, more crime, lower standards of education in our schools, overcrowding, new diseases etc., etc, etc. For me, I'll pay more for tomatoes.
>
> Americans, We need to wake up. The guest worker program will be a disaster because we won't have the guts to enforce it. Does anyone in their right mind really think they will voluntarily leave and return?
>
> It does, however, have everything to do with culture: A third-world culture that does not value education, that accepts children getting pregnant and dropping out of school by 15 and that refuses to assimilate, and anAmerican culture that has become so weak and worried about"political correctness " that we don't have the will to do anything about it.
>
> If this makes your blood boil, as it did mine, forward this to everyone you know including your Congressmen and Senators.
>
> CHEAP LABOR? Isn't that what the whole immigration issue is about?
>
> Business doesn't want to pay a decent wage.
>
> Consumers don't want expensive produce.
>
> Government will tell you Americans don't want the jobs.
>
> But the bottom line is cheap labor. The phrase "cheap labor" is a myth , a farce, and a lie. There is no such thing as "cheap labor."
>
> Take, for example, an illegal alien with a wife and five children. He takes a job for $5.00 or 6.00/hour. At that wage, with six dependents, he pays no income tax, yet at the end of the year, if he files an Income Tax Return, he gets an "earned income credit" of up to $3,200 free.
>
> He qualifies for Section 8 housing and subsidized rent.
>
> He qualifies for food stamps..
>
> He qualifies for free (no deductible), no co-pay) health care.
>
> His children get free breakfasts and lunches at school.
>
> He requires bilingual teachers and books.
>
> He qualifies for relief from high energy bills...
>
> If they are or become, aged, blind or disabled, they qualify for SSI. Once qualified for SSI they can qualify for Medicare. All of this is at
> (our) taxpayer's expense .
>
> He doesn't worry about car insurance, life insurance, or homeowners insurance.
>
> Taxpayers provide Spanish language signs, bulletins and printed material.
>
> He and his family receive the equivalent of $20.00 to $30.00/hour in benefits.
>
> Working Americans are lucky to have $5.00 or $6.00/hour left after paying their bills AND his.
>
> The American taxpayers also pay for increased crime, graffiti and trash clean-up.
> 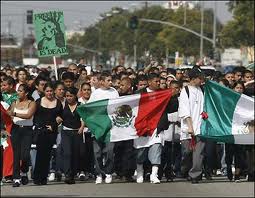 POSTED BY JUST COMMON SENSE!..GOES TO SHOW THE COWARDICE OF THE HATE MONGROULS THAT HIDE BEHIND THE KEYBOARD AND JUST BITCH AND BITCH TO SOME OTHER YELLOW BELLY THAT WILL ALSO DON'T DO ANYTHING ABOUT IT BUT BITCH AND BITCH... VIVA LA RAZA UNIDA.....

Just look at the kind of country they have. Weasel politicians are selling us out. I don't want to live in a third world country. Some people say that mexicans are undocumented democrats.

Every single political issue that arises has some kind of conflict of interest attached to it. Political correctness amounts to puting up with a whole bunch of garbage that no other country on earth has to put up with. Hypocrites make me ill.

Incompetent fools like the first poster are the future of this country.

I already see so much of the huge free-rider issues where I live and I didn't even think about the W7-ITIN (Individaul Tax ID Number for those not eligible for social security numbers)!! Talk about it takes a village. Looks like we taxpayers working our whole lives each get our own village to support! I have absolutely no problems with hardworking, LEGAL immigrants who help support our communities! jo