Why I Don't Get Too Excited Over the World Series Anymore 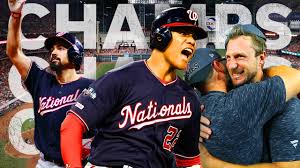 Yes, I enjoyed the World Series.......but I ain't gonna fall in love with any team. The Washington Nationals had a payroll of $151 million (3 pitchers representing nearly $90 million of that total). The lowest salary was more than half a million dollars and the average was about $8 million per year.
Two Washington Nationals walked out of the clubhouse last night, fully prepared to abandon their teammates to the highest bidder. The two are seeking about $80 million per year, with long term contracts.
Cost to attend this Word Series? From $300 to $1200 per ticket.
The fans ought to be thanking themselves, not the uniformed corporates on the field. Many folks are raiding their children's college fund or their IRA to pay for their game tickets.
And no matter how many times a player says "this victory is for the fans", they would drop you in a heartbeat for a bigger paycheck.
So let's not get too excited here, folks. It's all business now; from parking fees, game tickets, and the two hundred bucks you spent on hot dogs, beer, and Cracker Jacks.

Post Script:  The Washington fans did not endear themselves either when they showed such disrespect for our President.  (Not surprising since most of them are probably ticks who latch on to a bureaucrat position and suck for all they are worth.
Posted by A Modest Scribler at 2:00 AM

All you need to know about Washington DC is that it's 76% Democrat, 6% Republican. No more need said....

Stopped wasting time watching pro sports years ago. Don't miss it at all. Nothing more than actors with athletic ability. Same lack of intelligence.

Randy, I can take or leave the NFL but I love baseball. It is the only sport left that can't be totally destroyed by ego or greed. And when it ends in October it leaves a huge vacuum for me till spring training comes around. It is not the big World Series spectaculars that win me over. It is that mid-week game in the middle of the season, when some form of magic happens when you least expect it.