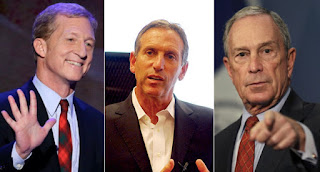 In the last year two billionaires have learned the hard way that they can't buy the Presidency.  Now it seems Michael Bloomberg might give it a shot.  Long before Starbucks magnate Howard Schultz tried, decades before liberal billionaire Tom Steyer tried to stuff the ballot box, Ross Perot funded much of his own campaign, did relatively well, but really only managed to get Bill Clinton elected.

So far at least the Presidency is not for sale, except collectively, by party, if a bigger gravy bowl is promised.  Going solo hasn't worked very well.  How many of you would be surprised to know that Hillary Clinton spent twice as much as Trump during their 2016 struggle.  Instead Trump turned campaign funding upside down.  Instead of hustling votes through small towns he simply held big media following rallies that ran on both the morning and evening news.  Ironically it was the media that elected Trump.  Anytime they wanted high ratings they simple had Trump drop by in the studio for an interview.

Trump would then reiterate his campaign points.  The liberal pundits would patiently wait him out, then snicker at his agenda as soon as Trump left.  Those liberal snickers were what got Trump elected.  Seems the American people supported what Trump said, and what the media thought was funny.

I recently read a news piece that said the media gave Trump about $5 billion dollars in free media face time; TV time that Trump would have had to pay for had the media passed him up.

Anyone paying attention in 2016 witnessed Hillary ads 24/7.  Combined, Hillary's campaign and the Democratic party shelled out over a billion dollars in an effort to get Hillary crowned.  Didn't work.  America found her message both empty and false.

So good luck Mayor Mike.  You can shell out a billion for campaign ads and all people will remember is that you were dictator of New York.......dissing the NYPD, hiking cigarette prices to $14 bucks a pack, and forcing fast food chains to get rid of their large soda cups.   That's a message that won't sell.......even if you spend a billion dollars to pimp it.
Posted by A Modest Scribler at 2:00 AM