Why Meatloaf Ought To Be On The Thanksgiving Table 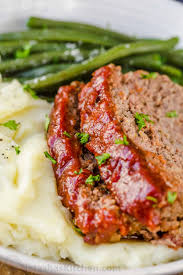 It was Benjamin Franklin who wanted the turkey to be deemed our national symbol. Thankfully better heads prevailed and our founders chose the eagle.
I don't know why Franklin and his ilk had such a fetish for turkey. They are ugly birds. And, let's face it, if you don't dress the dish up with cranberry and stuffing, and smother it in gravy, it ain't really much of a meat.
So the other night, as I was scarfing down my wife's utterly delicious meatloaf, I began to think meatloaf really ought to be the centerpiece on our nation's Thanksgiving Day table.
Consider how meat loaf is made. Your toss into a bowl a certain amount of ground beef, you add ground sausage, you toss in an egg, then you dump your chopped up, stale, three day old bread into the mix. You add spices, stir it all up, then dump into a loaf pan for baking.
Let's face it; America has always stood for diversity. We have somehow been able to mix English, German, Irish, Italian, Chinese and Japanese and Hispanic, and served up a melting pot that nourished us for more than two hundred years.
All we are as a people is basically meatloaf, the the sum of our parts much greater than the many parts that make up that whole!
You might be interested in knowing that meat loaf has been around since Roman times. But it wasn't until America began preparing it that it became a tasty dish indeed!
So we are wrong to be embracing the turkey. No matter how we doll it up it will never achieve the culinary delight we find in a good pan of meatloaf.
Maybe we could save the turkey for another holiday. New Year's Day perhaps? When our stomachs are a bit queasy after the New Year's Eve debauchery of downing quarts of hard liquor? A good Bloody Mary and the penance of dry turkey meat ought to be our lot for drinking, dancing and wearing funny hats the night before!
That's all I got to say. If you think I'm crying "fowl" on turkey, well you're right!
Happy Meatloaf Day, Blog friends!
Posted by A Modest Scribler at 2:00 AM

If it wasn't for Thanksgiving, many Turkey Farmers would have been out of business if it hadn't been the "Thanksgiving Bird". How many times do you buy and cook a Turkey the rest of the year? Once? Twice? none of the above? The Turkey Lobby got it on the menu. I'm all for a 15 pound Meatloaf for Thanksgiving. I'm sure turkeys would agree. I like meatloaf sandwiches way over turkey anyway. HAPPY THANKSGIVING, Scribe!!!

Thanksgiving is pretty much it for the full bird, Frank, though I do put away turkey sandwiches throughout the year. Happy
Thanksgiving to you and yours as well.