The American Dream's Alive And Well On Snead Drive 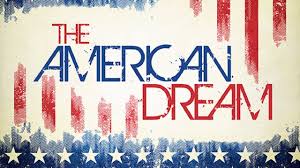 Three doors up the street from me lives an elderly lady who lives rather modestly in her 60 year old home. She drives a 90's era Buick and most probably lives on a widow's pension.
Each week a Hispanic lady drives up in her new Cadillac Escalade, plucks mop and broom and cleaning supplies from her ride, then walks in to the old lady's place for a couple of hours of house cleaning.
The Hispanic lady, if one can tell by the price of her ride, is far wealthier, and living a higher lifestyle than her elderly "employer".
And that is the essence of the great American Dream. One generation in elderly decline.......pinching pennies cause she can't work anymore, contrasted by the 40 something Hispanic lady who works her ass off, sweeping and dusting and mopping floors, building a future, one mop swipe at a time, for she and her family.
You see the manifestation of building The American Dream most often with the immigrants. Spawned in poverty, they come to this country, realize that if they work hard enough they can become prosperous, then set off to do so.....totally ignoring the established societal precepts that say working humble jobs is somehow beneath many of those born under the protective shelter of the American flag.
While immigrants are the largest swath of those who partake in the American Dream, they are not the only ones. The native born among us who were instilled with a work ethic are also American Dream "builders". They are the ones who start small businesses. They are the ones who believe welding girders, or assembling machinery, or wiring new homes are not beneath them. They don't much give a damn whether the job is "blue collar" or "white collar", as long as the money is good.
Alas, we have too few of those "American Dream Builders" these days. Too many government incentives instill a lust for sloth, in lieu of work. Too many wide-eyed youth believe Philosophy and Art degrees will win them success. And far too many are satisfied to lament about "income inequality" while some 7 million well-paying blue collar job positions remain vacant.
But it is heartening, over here on Snead Drive, to see that house maid pull up in her late model, luxury Cadillac. It says the American dream is real.........for anyone who wishes to pursue it.
The American Dream is not some lofty, unachievable goal. It was written into the American creed by Thomas Jefferson more than two and a half centuries ago:
"We hold these truths to be self-evident: that all men are created equal; that they are endowed by their Creator with certain unalienable rights; that among these are life, liberty, and the pursuit of happiness." (emphasis on "the pursuit of happiness please)
Thomas Jefferson
That house maid, three doors up, did not have to read Jefferson to understand the American Dream. It lives in her heart, and in the heart of anyone who longs for a better life.......and is willing to work hard to make the dream come true.
Posted by A Modest Scribler at 2:00 AM

I agree, to a point. I'm sure people will call me Racist or any other number of names, but it's a great story ONLY if the Maid isn't being subsidized by the US Government. My Grandparents came from Poland and Sicily and were given NOTHING. They had to make do with hard work. No handouts, no free healthcare, no help from Social Security or Medicare or "Sanctuary Cities and States". So if you expand the story to include NOT using food stamps etc then the story is wonderful. I'm all for it. You may say I'm selfish and that today and yesteryear are different. It is different. We have a 22 Trillion dollar deficit that will only get larger the more generous we are. I have Children and Grandchildren to worry about. Time to start paying down the National Debt. And I can think of no better way than to stop being Santa Claus to the world....