I'm Not Ready For Still Another Social Experiment 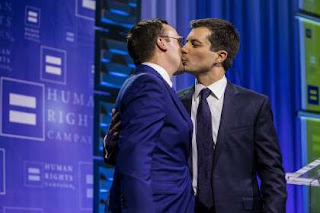 Democratic candidates for President are so out of the mainstream even their party loyalists are agonizing over who might govern from the "left-middle". Not a week goes by that we don't see some new champion emerging in the polls. First it was Biden out front, then Bernie for a week or two, then Liz for a month. Now the polls in both New Hampshire and Iowa have South Bend, Indiana Mayor Pete Buttigieg taking the lead.
I'm sorry but I'm not ready for "Mayor Pete" to be "President Pete". I'm sure I'm in the minority on this but I'm not ready for a "First Man", I'm not ready for the hand-holding and victory kisses. But most of all I'm not ready for the 20 percent of the country who are cruel savages, who fill social media with terms like President Butt Plug, or a Commander in Chief labeled as President Butt Giggle.
Frankly, I'm not ready for still another social experiment. First we voted in a Black man who nearly destroyed us. Then we elected a businessman who couldn't recite you even the Preamble to the Constitution, or even score five of the ten Bill of Rights. This nation cannot afford still another social experiment.........just too see how a gay man might steer the ship of state.
There may come a time for that. I don't believe it is now and I don't believe why I say that stems from my aversion to gay marriage. While I have resolved myself to accepting (and not being cruel about) gay marriage, I believe there are far too many important national issues that need to be resolved. And we don't resolve those with ever increasing fractures in our society.
Call me a sexual bigot if you like. But even when I throw out all the other objections to Buttigieg I can only come up with a mayor of South Bend, Indiana who has been largely ineffective in solving even that city's woes. How can we expect him to lead a nation when he has shown he can't even manage a city?
I have no idea who's gonna win the Democratic Presidential lottery. And don't much care. My values clash so fiercely with all of them I find none to be acceptable......"Mayor Pete" among them.
Posted by A Modest Scribler at 2:00 AM

He’s unqualified. His sexual deviancy is simply facet that should remove him from contention. The big problem with him is his false claim of being a legitimate Christian. If you listen to him speak about how real Christians are to be tolerant and forgiving, it is very appealing. What you will never hear him say is that Christ told people He did not come to replace the law, but to fulfill it. I agree that the experimental Presidency should end, but I have no interest in the professional politician with no life experience outside of government so what is left? Guess I’ll sit this one out.

Re "sit this one out", I seriously considered that in 2016. Instead, I looked at Hillary and voted for a Trump whose behavior I detest.