Why You May Not Want That Pay Raise 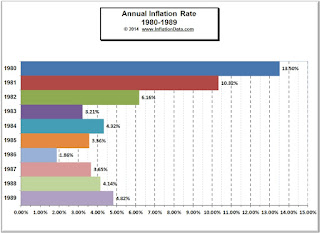 Read three opinion pieces this week from liberals demanding higher pay for American workers. Idiots.
First of all, one ought to realize that only under Trump have American workers seen an increase in their paychecks. Obama sure didn't make it happen.
Secondly, a bigger paycheck does not guarantee you either a better life, or greater buying power. One need only look to 1980, the last year of the Jimmy Carter Presidential disaster.
During Carter's term the AFL and CIO and UAW unions were demanding and getting 10% annual raises. But in order for the Democrats to satisfy greedy unions, companies had to charge more for their products and services.
So, in Carter's last year the inflation rate was nearly 14%....meaning your buying power was declining by that much each year. And the hardest hit were people living off their life savings, or drawing a Social Security check. (Yes, there really were old people eating dog food back then).
Once elected it took Ronald Reagan several years to wring inflation out of the economy. (See chart below) To do that he had to battle the George Meany and Jimmy Hoffa union thugs, and fire all the Air Traffic Controllers en masse.
Compare Carter's numbers to Trump's. The current inflation rate is 1.76 percent and American wages have increased 2.5 to 3 percent annually since Trump took office.
So what would you, the average Joe working in small business, or on a government pension prefer to have.....a 3 percent wage hike and low inflation.........or a five percent wage hike and 14 percent annual inflation?
If I have to explain why Trump's economy is better than Carter's or Obama's we are all in trouble.
Posted by A Modest Scribler at 2:00 AM

There's one and only one reason Dumbocrats want higher wages. So they get more tax money to spend on Welfare, Illegals insurance and line their own pockets. Trump increased wages, lowered taxes. Dumbs might increase wages but raise taxes. I'm amazed how Stupid people can be. I guess our Schools really do suck....

The economic arguments for next year's presidential election will be interesting. Democrats are going to have to craft a message that somehow makes their tax hikes (which every Democrat candidate has signed on to) appear to be a good thing. It will be convoluted, misinformation, and flat out lies. Trump simply says "Look at what we've built. If you want more of the same, vote for me."