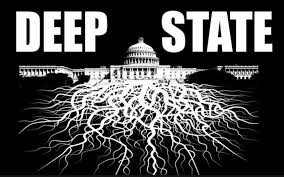 Every few months some conservative political pundit writes an essay about the "Deep State" that anyone elected to go to Washington, to stop the dry rot on the ship of state, has to combat. Almost always those essays are targeting some rogue who sits high in the governmental pecking order.
Unfortunately it is not folks like today's impeachment witnesses, Lt. Col Vindman or Ms. Williams, who present the biggest roadblock to reform. Instead it is the hundreds of thousands of government bureaucrats who actively or passively resist ridding Washington of waste and corruption, which is the source of their well financial well being. It is those GS 5's to GS7s, parked in cubicles on the multi-floor, marble fronted governmental ant hills, who want everything to stay as it is. Tens of thousands of those bureaucrats serve no useful purpose. Many were hired as political favors from some federal solon. And as we have seen in the occasional headline-grabbing revelation, many of them are cruising porn sites or gaming or mixing it up on social media when they are supposed to be laboring at some dreamed up task they were hired for.
And most of these deeply burrowed but well compensated moles are bonafide members of the Democratic party. It is the Democrats who best protect and defend their unionized lethargy.
Those "deep state" people are the ones who sneer at the citizen who seeks some form of government assistance. Those "deep staters" are much like the guy at your local DMV, or the municipal bureaucrat you can't get on the phone when you wish to protest a property tax error.
There are two million people working for the U.S. government at the federal level. And many of them have never spent a single day in all their years of employment doing something productive for you and I. The only commonality those deep staters have in common is resistant to change.
That's the formidable obstacle a reformer like Mr. Trump must battle to change anything in Washington......... a task that is virtually impossible. You would have to burn Washington down to its roots to make any headway in ending Washington corruption.
So as we watch the impeachment hearings. As we listen to Lt. Colonel Vindman, or Miss Williams, let's remember that they are only what we see above the surface. These are just the people who work in government and get their 15 minutes of fame.
I am not denigrating either of these two witnesses in any way. Unlike the character assassinating that Mr Trump practices, I'm just saying that President Trump is being attacked, not because he's a bit idiotic, but because he's Republican. You would never see teams of bureaucrats rebelling against Bill Clinton or Barack Obama. Those Democrats were one of them........they, as Democrats, are their protectors of the status quo. Now those two million largely Democratic federal workers are coming out of the woodwork, doing their best to discredit someone who, no matter how inept, is trying to root out fifty years of government corruption.
The Deep State is alive and well, people. You should be afraid...........very afraid.
Posted by A Modest Scribler at 2:00 AM

What scares me now, is eventually someone like Elizabeth Warren will be elected. Then the democrats will feel they have been given free rein to pack the employment rolls ever deeper. A republican thirty years from now will be impotent in any federal capacity.

President AnyoneDemocrat will do the exact same thing Chief Warren would do. Be prepared to be a LOT Poorer in 2021 if anyone with a (D) after their name becomes President. They don't want anyone but themselves to have money in their pockets.

After three years waiting for Trump to start chopping heads, indicting, and exposing the scum infesting government, I've come to the conclusion it is never going to happen. The cancer infesting government at all levels has succeeded in completely corrupted the system. Despite his braggadacio and promises, Trump bas been effectively castrated as a force of change. Whether he is removed from office or reelected, the system plods along undisturbed. So, no more rants about the outrageous actions of phony "public servants", complaining about self-dealing politicians, or thinking my vote in any way matters. From now on, I only vote on tax/bond measures and that will be to deny government more money. We are leaving CA in less than two years. We're putting our medical and legal practices on the market. We're readying our home to be sold and are traveling to both AZ and ID to look at locations. We have no illusions about being able to escape completely what is coming, but we can blunt to effects significantly.

I seem to have stirred up a groundswell of pessimism this morning. Sorry.