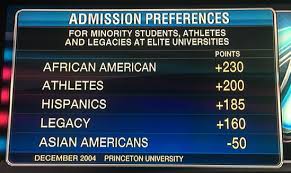 You all know their cultural profile. They tend to sit at the front of the class. They take notes. Actually tote their homework home.
They get home, then work in the family restaurant, or small grocery, or in the soybean and citrus garden. They then sit for a couple of hours of homework. There's no television or gaming going on during the week. In their "spare time" they are reading the college recommended reading list....when still in the 5th grade.
For SAT preparation their parents have sacrificed ten percent of the family income on a tutor. Library copies of SAT preparation books cover every available surface of the child's bedroom.
And when the SAT tests come around many, many of those Asian kids score in the stratosphere, some of them with perfect scores every year.
Until ten or fifteen years ago that route to academic excellence scored them admission into the elite universities. And those Asian American kids would go on to be doctors, lawyers, electronic engineers, medical researchers, or business tycoons.
No more. When Harvard and the other Ivy League schools, and Stanford, and University of California, Berkley went all PC they began to severely curtail the admissions of those Asian Americans and began giving their university seats to Blacks and Hispanics of both the legal and illegal variety. Asian Americans were then forced to attend secondary universities if they wanted to get educated.
Somehow, in typical Buddhist fashion, those Asian families tolerated the reverse discrimination. Then, late last year the American College Board announced that they would begin assigning "poverty points" to the national SAT scores, the reasoning being that Asian Americans were given an advantage by being raised in a family with a goals oriented lifestyle, spiced with thousands of hours of hard work.
Not fair said the College Board. We need to start rewarding ghetto sloth and barrio crime rates. We have to factor in welfare queen mothers, and percentage of neighborhood drug use, and gang activity, then award "bonus points" on the test for the ghetto/barrio lifestyle.
Well, this time those Asian American moms and dads, and White American moms and dads said "enough is enough". Already favored with higher entrance quotas over the rest of America, Blacks and Hispanics ought not to be awarded still another leg up on a SAT test. The test ought to be graded on how knowledgeable a student is.
So yesterday the College Board announced they were backing off the award of "ghetto/barrio bonus points". The President of the College Board said "that's okay, we'll give university entrance counsellors other forms of data that will allow them to cherry pick poorly scoring minorities, and discriminate against those kids who did it the right way. "
After all, whoever said life is fair, right?
Posted by A Modest Scribler at 7:14 AM

Made this point repeatedly on other platforms. Asian kids over perform in academia, and browns/blacks underperform. Blacks are 13% of the population. In med school, under 5% are black students. Same in law/dental/engineering schools and hispanics are similar numbers. Why? FAMILY AND CULTURE. Asians don't divorce or have illegitimate children in the same percentage as blacks/browns. Asians prize education. Other races don't. Comes down to a married, two-parent family rearing their children properly, verses quasi-feral children raised on the street. No matter what the colleges do to skew the numbers, you'll still be seeing an asian doctor, lawter, dentist and engineer far more often than their dark skin equivalent. Am I racist? No. It's all in the numbers. Family is essential.

Well, Randy, Harvard would say you are indeed racist. But please include me in your ilk. It really doesn't take a genius to see that kids from stable homes, whose parents value education, do so much better than those who don't.