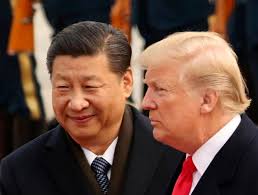 Flashback to 1981.  For the past five years an Asian nation, the world's new second largest economic power, was eating America's lunch.  Enacting such high trade barriers an American apple was priced at ten bucks per apple.  On the manufacturing front that Asian nation sold nearly 5 million automobiles to America, while America sold a paltry 4,000 autos in that Asian stronghold.  Incredibly, 67 percent of American commerce was made up with that Asian nation's products.

The Asian nation was of course Japan.  President Jimmy Carter came begging on several occasions, trying to talk that Asian nation into playing fair on trade.  They simply laughed at him and offered him seconds on his Kobe  beef dinner.  The Japanese then toured America, replacing "the ugly American of the 50's" into the "ugly Japanese of the 70's and 80's.  They employed their inflated Yen to buy American greenbacks and bought up half of Manhattan.  On a personal note; when we were stationed in Hawaii it was not unusual to find a Japanese walking up to your door and offering to buy your home.  And they were huge buyers in those days.

When Ronald Reagan took office he was burdened with a whole host of economic problems.....aggressive trade union bosses demanding annual 20 percent worker pay raises, mortgage rates topping 20 percent, an exodus of U.S. manufacturing jobs, a still aggressive Soviet Union, and U.S. government regulation that was strangling established businesses and snuffing the life out of infant businesses before they could blossom.

Reagan mounted an all out front on all of those problems.  He jaw-boned the labor unions and had to fire all his air traffic controllers to send labor a message.  He employed Paul Volker to wring inflation out of the economy.  He told the Soviets if they want a weapons contest he was ready for it.    He then slashed millions of pages of red tape and encouraged new businesses like Apple and Home Depot and Walmart to take a chance on him.  Finally he turned to Japan.  And Japan laughed.....but not for long.  Reagan imposed barriers on Japanese automobiles and semi-conductors and consumer electronics.  And soon those $800 dollar Sony VCR's began gathering dust on the shelves, and Americans were posing for the newspapers with sledge hammers and crushed cars and TV's.

Alas, Japan, inexperienced in managing an open economy, began suffering what has now become a 30 year recession.  The Japanese big wigs began to sell off their Tokyo office towers for distressed prices.  Soon the Japanese cigar-chompers were selling off their Manhattan and Hawaii properties.  And Japan long ago surrendered the title of 2nd largest economy, largely because America began eating their lunch with incredible electronic and medical and scientific discoveries, and using the internet to market those discoveries.

President Trump is now employing many of Reagan's tactics as he has called China on the carpet.  Just today (Wednesday) China's President Xi said Trump's tariffs doesn't bother him.  He says China will expand their domestic economy and do just fine.  To that I say "Good Luck".  Let's see him replace $550 billions of American purchases with an average Chinese consumer who pulls in $100 bucks a month.

One added note:  (and you can look it up) When Reagan was declaring a trade war with Japan the Democratic party stood at their respective podiums in House and Senate and declared Reagan mad.....that no one could stop the Japanese onslaught.   Japan would now beg to differ.  They learned the hard way....and the expensive way....not to tangle with America.

Will Trump be as steadfast as Reagan with China?  Only time will tell.  But let's give him credit for trying......something no President has had the courage to do since Reagan.

Trump is absolutely correct in being the first President to call China out. Both China and Europe as a whole have taxed the US in ways we don’t tax them. Same with NATO. The US pays 22% of the entire bill of NATO, more than the next 3 largest contributor nations combined. Libs complain about the US being the world’s policeman. I wish they would be as upset about us being the world’s financier.

Agreed. And we have to stop being so generous with borrowed money.