On The "Crazy Old Men" Front 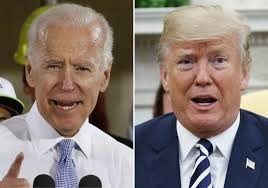 Crazy Joe Biden, as he campaigned through Iowa and New Hampshire this week, said America would have had a nervous breakdown if Barack Hussein Obama had been assassinated before taking office cause we would have missed all those wonderful accomplishments.
During that same speech Biden gave Bobby Kennedy and Martin Luther King an extra decade of life as he pronounced them being killed in the late 70's.
Then Joe talked about how rabid he was in support of the Woman's Equal Rights Amendment. Crazy Joe said critics called him gay. But he bravely stood up to that assault on his manhood.
In a similar vein Joe's spouse, Jill Biden said Joe ain't exactly yogurt with your favorite fruit at the bottom but he was her yogurt and he has the best chance of defeating President Trump. In other words, Joe is crazy but he's not as batshit crazy as Harris and Warren and Sanders.
Joe's keepers are keeping a tight rein on him but they just could not seem to stop him from giving King and Kennedy an extra decade of life.
Over at the Trump White House Donald Trump said he had considered awarding himself the Congressional Medal of Honor but his aides advised against it. (He did accept the mantle of "The Chosen One".)
Then, after declaring any Jew who votes Democrat as a traitor to their brethren, The Donald said we don't need to trade with the World's 2nd largest economy to succeed.
On a personal note, this week I read in National Review that Donald Trump is crazy but not as crazy as the Democrats. I tend to agree.
Where are Washington, Lincoln or Teddy Roosevelt or Ronald Reagan when we really need them.
Posted by A Modest Scribler at 2:00 AM

In other news, Joe Arpaio will be 88 when he takes office again. Let that sink in!

It's all over the news, Jeff. Would I vote for him over his Democratic opponent? Sure, though I think he's too damned old for the job. More likely, Joe will lose to a younger version of himself. Oh, after this piece was written we had Crazy Joe not even knowing what state he was in.. Sigh.

I agree, Randy. No matter the Democrat nominee, the choices will be pretty clear. As I wrote earlier, I'll root for the Warren, Sanders, Harris wing of the party. Biden and Trump race would just be a choice between who is more mentally troubled. The nation is weary of all this and just wishes it would all go away. It won't. It will get worse.