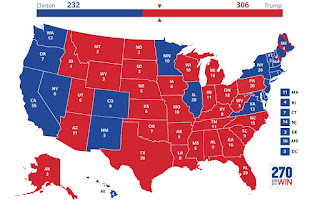 The other day I was reviewing the 2016 Presidential electoral map.  In that year Trump pulled out the first 21st century miracle by capturing Wisconsin, Michigan and Pennsylvania.    For 2020 that presents a problem for Trump.  In 2016 the Blacks of Philadelphia slept, not rallying for Honky Hillary.  Accordingly Pittsburgh and western Pennsylvania was able to offset Philadelphia's traditionally heavy Democratic turnout.  So PA went red.  Pennsylvania will not go red again.  Philadelphia is going to be geared up for free healthcare, student loan forgiveness and for slavery reparations.  So PA goes back to blue.

In Michigan Trump's promise to bring more auto jobs has largely gone unfulfilled.  Despite Trump's jawboning, the big three are still turning out cars in Mexico, and expanding operations in the south.  So don't look for Michigan to go red again.

That leaves Wisconsin, who only recently tossed their Republican governor, with Democrats threatening to take the statehouse next year.  And the Wisconsin folks are no longer throwing a snippy fit about Hillary ignoring them.  Look for Wisconsin to go back to blue.

Those three states represent 46 electoral votes.  Trump won with a whopping 306 in 2016.  Take those 46 electoral votes away and Trump is sitting at exactly 270, assuming he wins every swing state and sweeps the south.

Since 270 is needed to win everything's cool, right?

Well, except the Democrats, absent Hillary, pretty much have 278 in their pocket.  That trumps Trump's 270.  Even worse, Iowa and my home state of Arizona is showing signs of turning purple.....maybe even Blue.

The rest of the states are so solidly blue even Hillary couldn't lose them in 2016.  So I just don't see where Trump steals enough blue states in 2020 to compensate for those 46 electoral gifts Wisconsin, Michigan and Pennsylvania gave him in 2016.

Your thoughts?
Posted by A Modest Scribler at 2:00 AM

Don't disagree. However (you knew that was coming), the election is 15 months away. Lots can happen. I will say that if the economy goes into recession, Trump is done. Not that Democrats are miraculous when it comes to money but that will seal his fate. Equally important is what happens with Congress. Give the Democrats control of both houses and they will act with lightning speed. The filibuster in the Senate will be immediately dispensed with and simple majority rule will be the operative process. If the Republicans manage to keep the Senate or if God gives them the House, there is the possibility of a brake on the run away train. Other, we will see single payer healthcare (at a cost .uch more expensive than we are being told), gun bans (which most of the owners will not comply with), and massive tax increases. Throw in in a blanket amnestyand Democrats run the country into the ground. My crystal ball is no clearer than anyone else's.

Haven't yet looked at how many seats the Republicans in the Senate have to defend but the idea of losing both houses is scary as hell. Given the Dems success in 2018 I'm afraid of that scenario. I see no savior on the horizon. Sad. Damned sad.

I, personally, will continue to believe that Trump will get re-elected. I know your not a fan of him but I actually am. I think this country needed a 'bully' at the time he was elected. I don't agree with all he does or says but I think he was elected when many in this country were FED UP with all the crap and our country getting stepped on and taken advantage of.

If Dems get control, we all know what will happen. Just look at my hometown of Chicago and all the other dirtbag cities that they run! That would be the future of our country. Yes, as you said, sad. Damned sad.

I will continue to root for the re-election of Trump!!