Break Out The Trump Pom Poms 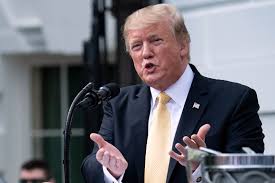 Like Trump or not, if you are moderate to conservative you ought to be rooting for his re-election.  A look at the 2020 Senate races makes that fact perfectly clear.  Let's look at a few cold hard facts about next year's election.

Given the 2018 results we can safely assume the House is going to stay in control of Pelosi and company.  So when we look at next year's Senate races things begin to look pretty scary.  For example, of the 34 Senate seats up for grabs in 2020, 22 are held by Republicans and must be defended if Republicans hope to maintain control of the upper body.  By contrast the Democrats must defend only 12.  And those 12 seats are firmly embedded in left wing states.

Looking at the crop of Republican seats up for grabs I can see at least six that are highly vulnerable.  Up in Maine "Semi-Republican" Susan Collins is under fire for voting YES on Brett Kavanaugh. Democrats are mounting a grass roots effort up north, funded and supported by the MeToo folks.

Over in my home state of Arizona, California migrants are arriving in droves and turning my state purple.  Martha McSalley, who already lost a senate race to a Democrat, and only occupying a Senate seat by governor appointment, is highly vulnerable.  Pollsters here are predicting she'll lose to still another Democrat, recent Democrat convert and retired astronaut Mark Kelly.

Over in Colorado the pot heads have taken over and current Republican senator Corey Gardner is susceptible to being smoked out of office next year.

In North Carolina Democrats believe they've sufficiently rigged, through the courts, some serious gerrymandering in their favor and just might be able to turn incumbent Thom Tillis' seat from red to blue.

Even in Kentucky, where Democrats have been making inroads, the senate's "grand poobah", Mitch McConnell's seat may be up for grabs.  The Donald and Mitch haven't revived enough coal jobs in that state to keep the blue collar happy down there.

I can think of two or three other Republican senate seats that are vulnerable.  But you get my point.  If both the House and the Senate fall into Democratic control it will be left to Donald Trump to stick his finger in the dyke and ward off Medicare For All, a taxpayer funded write off of $2 trillion in student loan debt, severe cuts to our military and a staggering $30 trillion dollar Green New Deal that pretty much bans autos and airplanes and farting cows.....and cripples the U.S. economy beyond any chance of recovery.

So, boys and girls, like Trump or not, you better be rooting for his re-election next year.  The alternative is just too scary to contemplate.
Posted by A Modest Scribler at 3:00 AM

Sadly, everything you wrote is true! Scary times indeed. It feels like the entire world is going mad with all the craziness. I honestly try not to read too much because it can be nauseating at times. If Dems get too much control, our country will definitely be run into the ground. Our financial back can only withstand so much and it is greatly strained already!! And when you look around the world, there's nowhere else to go. The USA is still the best country out there. Scary for sure!!

Were I younger, Carol, I'd be giving serious thought to Australia or Thailand.

Your concerns are very valid, but remember 2008. Pelosi claimed Dems would be in control for 20 years. They held the majority for 2 years, and the beating they took in 2010 was the worst in 70 years. I have to believe when voters are given the choice of a socialist or Trump, they simply won't stomach the idea of the leftist. If I'm wrong, the country will see much more of the division and fighting that the Dems started. We are truly at a tipping point.

Yes, Randy, you would think common sense will prevail. But next year we will surely test Jefferson's theorem that "when the majority can vote themselves benefits that is the end of the Republic". The lure of Medicare for All, a federal write down of $2 trillion in student loan debt, free tuition for all, and a free set of solar panels on every rooftop may be too difficult to say no to.

What I find scary is the debt load that young people are saddled with today. College costs an average of 10K per year at a state institution, the average college debt has risen to $38K, health insurance premiums are the same as a mortgage payment and the same goes for child care (average $ll,000 per year). I find it interesting that there is a great deal of whining over student loan forgiveness yet all the Trump pom pom wavers seem to forget that he filed bankruptcy numerous times and left a trail of folks whose back he climbed over to get to where he is today with empty pockets. That seems to be ok with you. Stunning! Loan forgiveness is fine for him but not for those who are the future of this country.
I also find it amazing that taking care of the health needs of our citizens would appear to be the worst thing that could possibly happen. All it takes is an illness that requires long term treatment for the average family to lose everything, savings, retirement accounts, or ability to save for the future. As for the uninsured (a steadily increasing number) who do you think picks up the tab for these folks when they hit the ER and can't afford to pay and what do you think this costs everyone else on an annual basis?

And, let me guess. The majority of you are sitting around with YOUR Medicare and supplemental health insurance cards in your pockets.

I find it stunning that jobs are plentiful in these great economic times, yet ‘our future’ cannot pay their school loans on their own! We all did. We never expected our school loan to be forgiven. College costs were lower but so were wages. In addition, I’ve NEVER asked for a handout from my country and don’t even expect to collect social security in a few years when I qualify for it. That system has been raped over and over! I pay through the nose for catastrophic health insurance because I’m a small business owner and was forced into this policy years back with the former administration. I USED to have perfectly fine healthcare as a small business owner, paying half the premium I do now with ‘normal’ co-pays & prescription coverage, until that all changed. And when I have to go to a doctor (which my current policy doesn’t cover but I pay $550 a month for), I use my hard earned money I’ve made because I don’t qualify for government support nor do I qualify for Medicare! I work. HARD.

As for long term treatment, there are policies that can be purchased for that. It’s offered for everyone. Where will the money for all this free healthcare and college tuition come from?? We’ve gotten along fine without FREE everything. I was taught to support myself and have been on my own since I was 18 years old. I’ve done very well for myself. No complaints here. I’ve worked hard and created a superior life without handouts.

Laws for filing bankruptcy, even business bankruptcy, are there to be utilized. Trump has owned many businesses and yes, some have failed. So because he’s rich, he should not utilize the laws that are in place? Doesn’t make sense. It’s a business decision.

You talk about picking up a tab for emergency care, yet feel we should pick up the tab for healthcare premiums AND college. SMH. Ridiculous! What happened to making your own way in this world….......

Carol - If there was universal health care you wouldn't be paying $550 per month for only catastrophic health care or be paying out of pocket for every doctor's visit. I hope you don't get really sick because all that hard earned money you've made will go to pay your doctor/hospital bill since you aren't on Medicare.
So let's talk about a young family who just had a preterm infant who will spend the next 2 months in the NICU. What do you think that will cost them even with insurance? How about the 50 something year old who has a debilitating MI or a stroke? Do you really think these folks have long term care insurance which, by the way, costs money? Do you think that if the government could negotiate drug prices the cost of an albuterol inhaler would cost $50-$60 at a pharmacy here (when they cost $2-$3 in Mexico)?
You also seem to have forgotten that the cost of college has risen to the point where most young people cannot afford it without taking on substantial debt that they will be paying back for YEARS and there is NO bankruptcy protection for them. It is most certainly NOT like it was when we were going to college.
Where is the money for all this going to come from you ask? Certainly not folks like Trump. Warren Buffet made 29 BILLION dollars more to add to his bottom line last year with Trump's tax cuts. I wonder how much Trump and his kids made? I wonder who is going to pick up the short fall? Could it be you and me?
We need to get off the 'what happened to making your own way in this world' kind of resentful thinking and get to figuring out how to make it possible for people to actually make their own way in this world.

My health insurance WAS fine until the previous administration 'fixed' the system. IF I received FREE healthcare, where does that money come from?? Our country is so far in debt, it will add billions to the debt! We'll never get out as it is! I never want someone to pay my way. Never.

Yes, coverage costs money. That's why we work. Rx costs are out of control.

If you ever listen to Dave Ramsey, there are many, many young people that are paying their way through college without taking out loans. There are also many young couples that have NO credit card and loan debt and are even paying off their mortgages. It's called working hard and not splurging. It CAN be done. But you have to put your mind to it and not expect a free ride.

Trump's tax cuts have freed up a lot of money for middle class. I noticed it in my tax filing for 2018 taxes. It was wonderful! Yay to Trump!!!! And who cares how much Trump and his kids made? I don't. I worry about myself. Making your way in this world doesn't take rocket science. I taught my kids to do it. They are 28m 30 and 32. And they are not in a ton of debt! I taught them well. They're not little snowflakes looking for handouts.

Trump's bankruptcies did not affect the government, since his loans were not made from the government. Student loans are made with taxpayer dollars, hence no discharge in bankruptcy, same with your tax bill. I agree witht he owner of this blog: Posting as "anonymous" indicates a lack of courage.