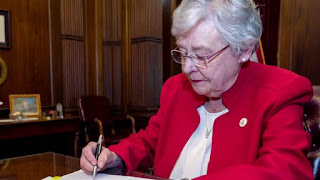 The state of Alabama knew beforehand that their newly minted abortion law will be shot down.  And the two daggers that will kill it off is the absence of exceptions for abortions in case of incest or rape.  I can't believe Alabamans are taking the law seriously.  Had they done so they would have included those exceptions.  No one wants their daughter or granddaughter to get raped by an urban thug, then be forced into carrying the thug's baby to birth.  Same for the incestual low lifes who rob a child of her innocence, then force that child to birth the result.

Perhaps Alabama, knowing the first appeals court will rule the law unconstitutional, were just trying to make a statement.  That's kind of a fool's errand since The Supremes are one Ruthie demise away from a 6 to 3 conservative majority.

Were I drafting that law I would have shown a degree of flexibility.  I would deflect as many liberal arrows as I possibly could.  I would draft a law that would appeal to the "great middle" of the populace who believe 500,000 murdered infants a year is a bit much.  But, conversely, that great middle would balk at the idea of forcing a woman to carry a thug or sex abuser's child around for nine months.   I certainly would never support a law that mandated that kind of cruelty.

Fortunately there are other states working on anti-abortion laws.  Many of them are far more flexible in granting exceptions to a birthing mandate.  It will be one of those that I hope get elevated to the Supreme Court.

As Alabama's law is written there is zero chance that the Supremes would even allow it to come to them for a decision and the rigidness of both the Alabama and Missouri legislation is going to hurt politically.  Never have the Democrats been presented with a broader brush than the far right wing neanderthals presented to them last week.