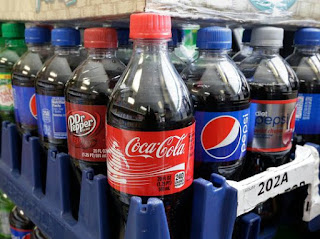 Was just reading the latest news on Socialist Philadelphia's now three year old soda tax.  The latest report says as many as 53 percent of Philadelphians stopped buying soda in Philly and went out and bought it outside the city limits...in almost the same percentage ratios.  And no one was surprised except the Socialist mayor and city council.

Now a member of the city council is introducing a bill to kill the soda tax.  Seems that the dollar in taxes added to a two liter bottle of pop was not yielding as much money as they thought.  And the money that was collected, instead of being earmarked for K-12 education programs, as intended, was channeled into the city's general fund.......to be used as the mayor wishes.

But there were further woes with that soda tax.  Seems that, even as the city was raking in those soda taxes they were experiencing lower sales taxes as the soda tax killed off small mom and pop neighborhood stores.  So, though they have not tallied the numbers yet, that soda tax probably resulted in lower overall municipal revenue.  Seems Philly is managing to kill off all those little mom and pop golden gooses!

The only winners in the soda tax wars seem only to be the rural Walmarts and other discount stores, who reaped not only the extra soda business...but also the grocery business that used to go to the mom and pop neighborhood stores.  Who needs to make two stops, right?

It seems to me that, if you're going to have a successful "sin tax" you have to have a socialist alliance between municipality and state, as in California.  Those poor Californians have nowhere to go when government wishes to beat them over the head and extract more of their hard earned money.   I'm sure Philly and the state of Pennsylvania can get there if they try hard enough.  As it is now Philadelphia pop buyers still have the refuge of stores outside the city limits to buy their sin products.  But thank God Philadelphia can buy their street drugs tax free on just about any street corner.

Berkeley has had a soda tax for 4 years. Interesting response from store owners (https://dailycaller.com/2015/08/21/berkeleys-soda-tax-fail-consumers-paying-less-than-half-what-was-expected/). In CA, the pols always claim to be advocating for the poor and the middle class, yet continually pass sales tax, gas tax, and consumption tax increases which are paid by the poor and middle class, too. Not that I mind - taxes should be paid by everyone, not just a few. BTW, Berkeley promised to use the funds from the soda tax for "child health care", but dumped the money into the general fund.

Seems to me a perfect storm for "Black Markets? to pop up everywhere the tax Idiots hit. Can't get around gas taxes but just about anything else can be purchased online and shipped, even soda. Suppliers are resourceful, Consumers, adjust.

Re the taxes collected in Berkley, a few years ago Arizona governor Janet Napolitano, desperate for funds to nourish the 47 percent, hiked the taxes on cigarettes. Immediately Indian tobacco sales rose and Arizonans began smuggling smokes in from Nevada. The "Dims" never get it.

Frank, just google the cigarette market in New York City. The Mafia dons are smiling wider than at any time since prohibition.