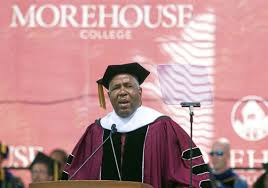 Unless you've been off visiting New Zealand or Swaziland you've no doubt heard of billionaire investor Robert F. Smith's $40 million dollar student loan payoff of this year's entire Morehouse University's graduating class.  The students were naturally stunned, the faculty was elated and the Democrats cheered as Smith challenged other rich liberals to pick up the tab for next year's graduating class.

I too thought it was all wonderful.  Then I began to think a little harder about that generous donation.  Given the doubling of tuition rates over the last decade Smith might have gotten off cheaper just ten years ago.  $20 million sounds pretty cheap when you slot it up against this year's $40 million.

So who really profited most from Mr. Smith's donation?  Certainly it was the students.  Having borrowed freely from the student loan program the last four years (several had run up $200,000 in student loans), a good hunk of those loan monies going to financing cars, ordering out for pizza three times a week, and frequenting beer bars on the weekends, paying for cool wi-fi wired pads, and then, if there's enough left, paying for tuition and books.

But perhaps the biggest winner are the universities themselves.  They are now free to continue boosting tuition and student fee rates at a perky 5 to 10 percent a year....no market downward pressure to rein them in.

Were there losers in Mr. Smith's generation donation?  How about those students who worked in the school cafeteria, or the library, or on the campus landscaping crew, to earn money to defer the cost of college room and board?  What do they get from Mr. Smith?  How about the part time bar maids and Starbucks baristas who worked their tail off 25 to 30 hours per week, then coming home to study for exams?

And from a more long term perspective, what manner of graduate did Morehouse just turn out following the graduation ceremony?  Will they be looking for a bailout in their future?  Will their eyes be focused on hard work, or the next sugar daddy appearing on the horizon?

And, yes, there was another huge loser as soon as Mr. Smith proclaimed his generosity.  And the loser is the taxpayer.  Mr. Smith will write off that $40 million as charity on his federal and state return, or find a line in the tax code and classify it as an "investment"....and based on Mr. Smith's income bracket, that's millions not going into the coffers of the U.S. Treasury.  In fact I'm betting that Oprah Winfrey even now has her accountants running the numbers and figuring out how many college student loans she can pay for, be praised for, before forwarding the bill to you and me.

But, no sweat. Mr. Smith gets to play the role of heroic benefactor.  And the unintended consequences of his gesture will be felt far and wide across this nation.

I'm sorry, but this is all just sad.  Damned Sad.
Posted by A Modest Scribler at 3:00 AM